Okay so, I know I haven’t been around much and I have to sincerely apologize — between house guests, yard work, a clown, caretaker and character of a bulldog, and lots and lots of the kind of work that actually pays me, I’ve been kind of swamped!  I felt it only right that one of the first nights I was back to cooking for “just us,” I should share this inexpensive and simple dinner idea with you:  pasta carbonara.

Pasta carbonara is quite literally, pasta with bacon and eggs.  I know it initially kind of SOUNDS a little odd, but let me tell you — it’s super easy, it’s fast, it’s a crowd pleaser, and it’s very, very affordable to make.  Let’s eat!

This stuff is fantastic.  Adults like it, kids like it, kind of everyone likes it.  John is not a person who likes pasta or noodles with any kind of creamy sauce on them, and HE likes it.  There’s no cream or butter in this recipe, and there’s just a little bit of parmesan cheese.  The eggs are what works all the magic.

Here’s what you need:

Pasta (I used Bucatini here, which is like a thick spaghetti with a hole in the middle, like a tube),

one egg per person you’re serving plus ONE extra yolk,

pancetta (or bacon or guanciale, if you can get guanciale for gosh sakes get it.  I used pancetta),

and olive oil.  Also of course, salt and pepper to taste.  Easy?  EASY! 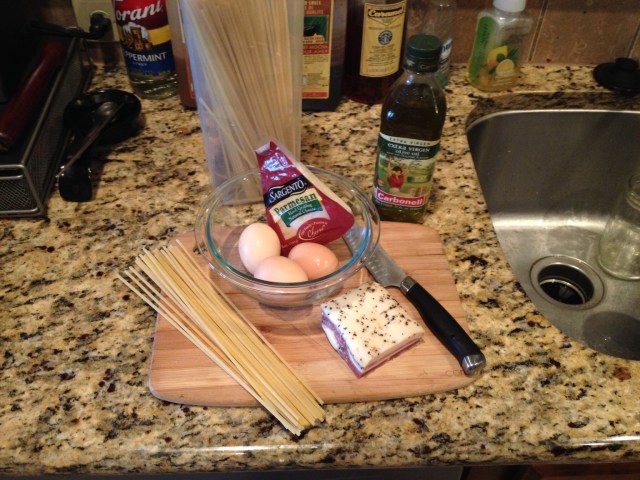 Chop up your pork product of choice into chunks, and get it ready to toss into a hot skillet.    I use the equivalent of about 1-1.5 pieces of regular bacon per serving. You can add as much as you want, though. 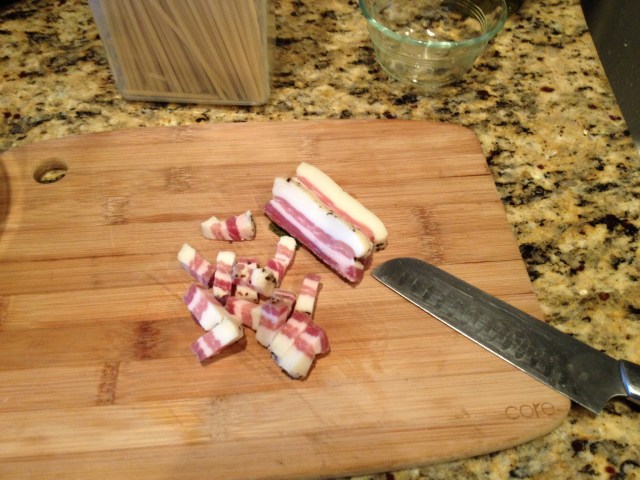 In a bowl, put the eggs plus extra yolk, a tablespoon of parmesan cheese per serving, and some fresh ground pepper (I don’t add salt here because the cheese is salty) and beat them til they’re frothy. 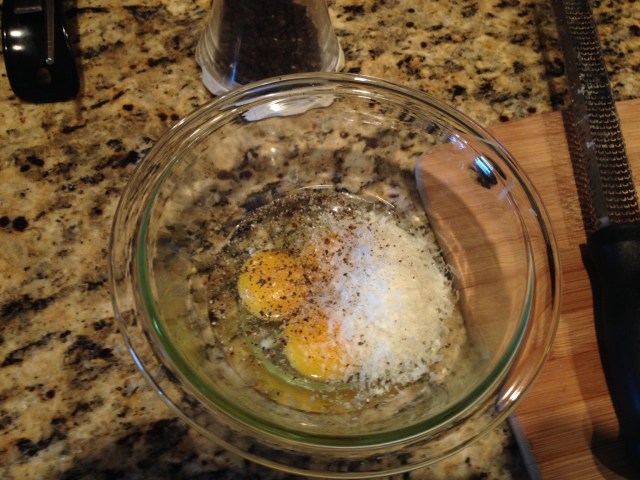 Behold, the hardest part is done: 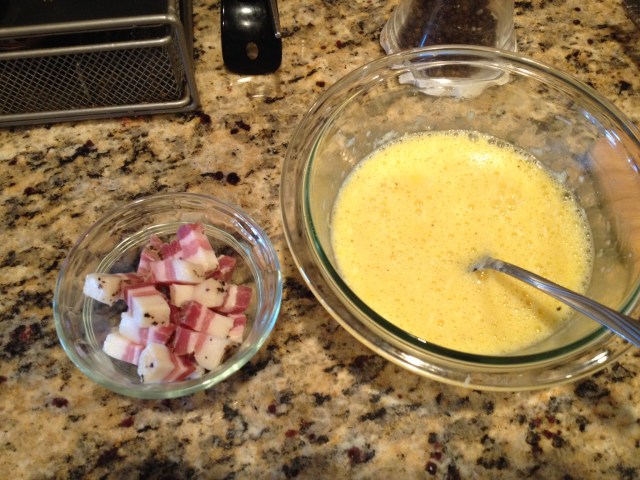 Start boiling enough SALTED (!!!!) water to cook however many portions of pasta you’re making.  This little recipe assumes 1/4 pound of pasta per one person, or a pound of pasta per 4 people.  Please salt the water.  It helps the pasta taste good, because the pasta absorbs the salt as it cooks.

While the water’s on the heat and getting jubbly bubbly, toss your bacon into a hot pan with a splash of olive oil, but don’t cook it on super hot.  We just want to gently render the fat out of the pork and still have yummy bacon left to eat in the pasta when we’re done. 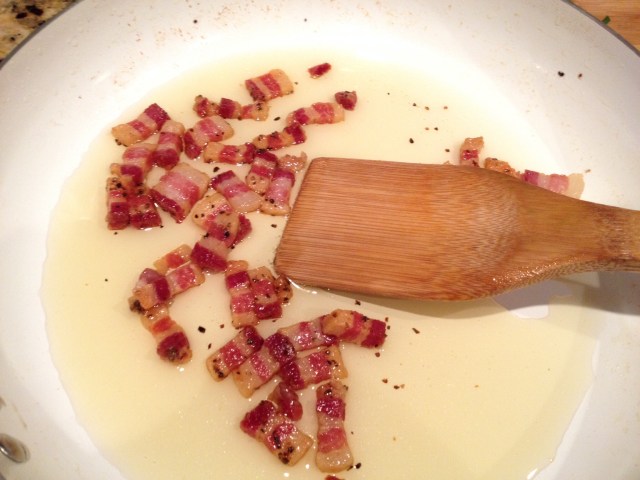 Remove the pork pan from the heat, but don’t put it too far away.  As soon as that pasta is done cooking, transfer it right into the (now warm, but not hot) bacon pan and toss it with the chunks of meat and glorious fat.  Just coat it. 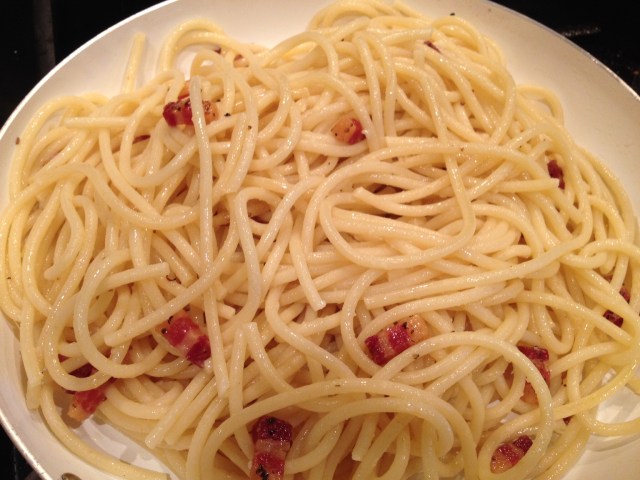 Then, while the pasta is steamy and the pan is warm (not hot), pour your egg and cheese mixture through the pasta and toss toss toss.  The object here isn’t to scramble the eggs, it’s to let the eggs get creamy with the starch from the pasta and the little fat from the bacon and just coat the pasta in deliciousness.

Look closely in this picture, you can see just how the eggs and cheese are all gently creamy on the outside of the noodles.  Mmmmmm.  Noodles. 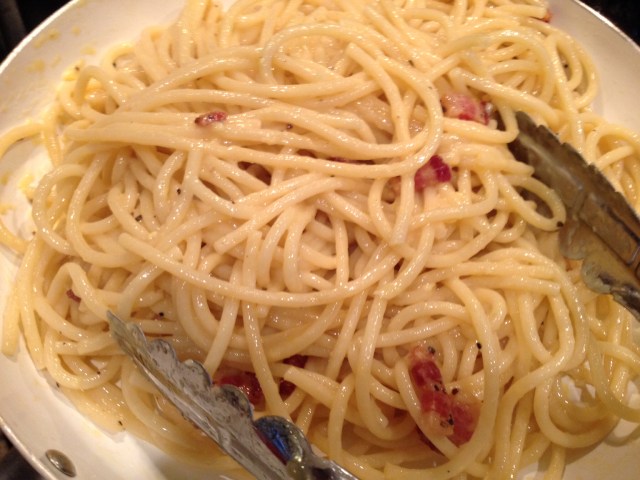 See the deliciousness?  Yes you do!  Give it a taste and if it needs a little salt, sprinkle that goodness on, and maybe another sprinkle of pepper.

Then, toss it into a bowl and pass out the forks.   This whole meal is super cheap, super easy, and shouldn’t take you a half hour.  Yay cheesy eggy bacony pasta goodness!! 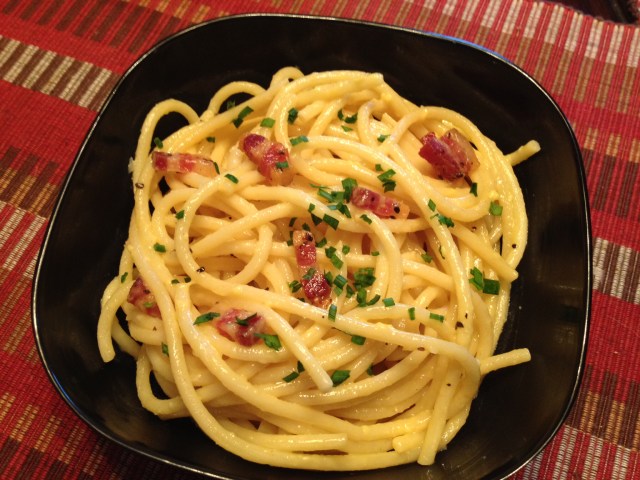