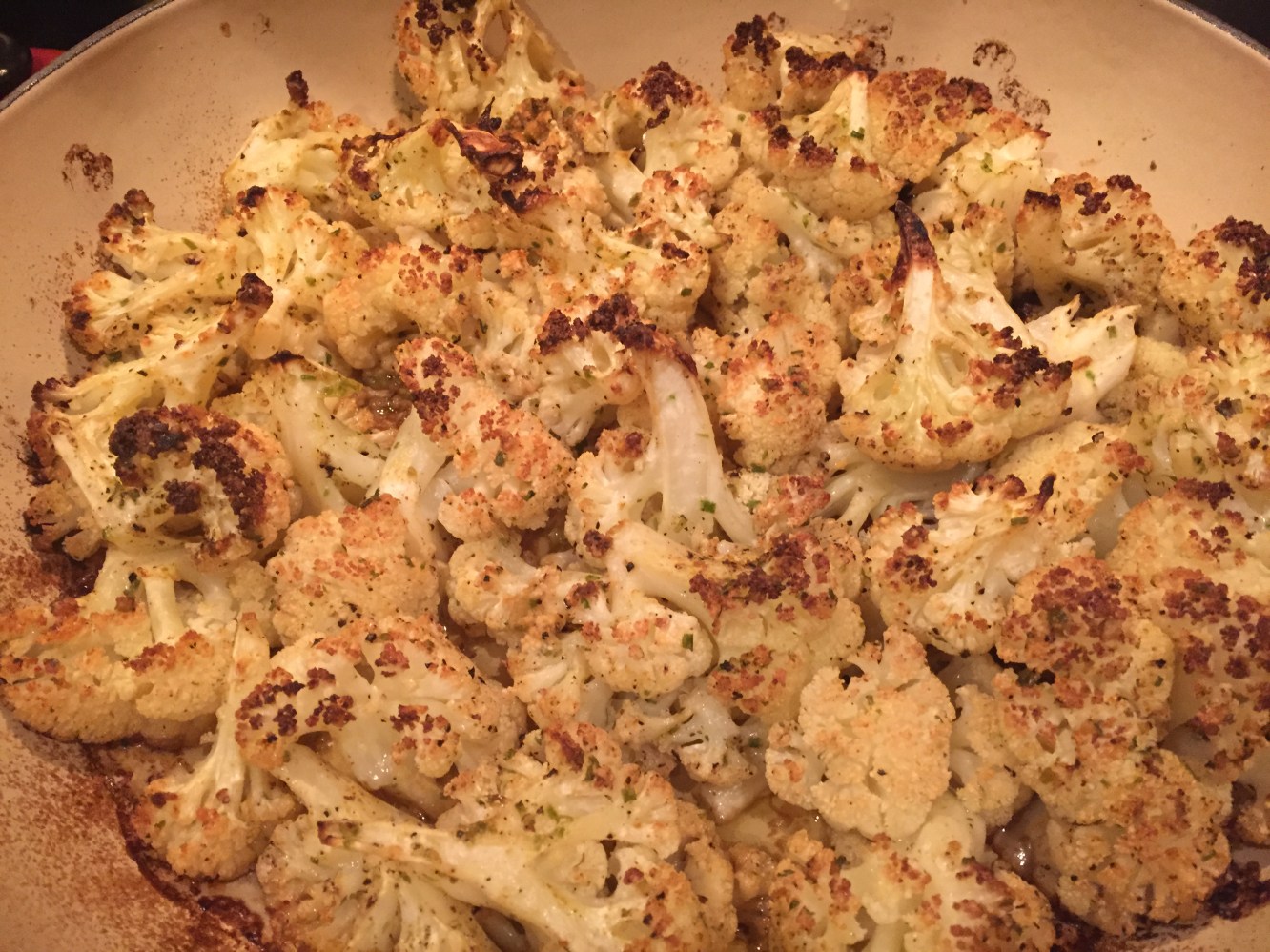 Happy new year!  Yeah, I’m about a month late with the well-wishes, but one of our New Year’s Resolutions here at Casa Sass is to cook more and eat even better, and continue to support local food sources.  And, write more.  Because I actually love to do this, and it keeps getting pushed to the bottom of my “to-do” list by Big Important Life Things.  Time to make our food conversation a Big Important Life Thing.  Let’s start with roasted cauliflower!

OK so, that’s our preamble.  Here’s the nitty gritty:  roasted cauliflower is abso-freaking-lutely DELICIOUS, and if you have not yet tried it, you’re just going to have to.  It’s easy, comforting, roasty-toasty, vegan, gluten-free, low-carb, low-fat, paleo, diabetic-friendly, and probably [fill in the blank of whatever dietary restrictions you might have, here].  It is also SUPER full of healthy dietary fiber, packed with potassium, bursting with Vitamin B-6, and one head of cauliflower provides 472% of the day’s necessary Vitamin C.  That’s not a typo.

Did I mention an entire head of cauliflower is about 140 calories?  Yeah.

END_OF_DOCUMENT_TOKEN_TO_BE_REPLACED 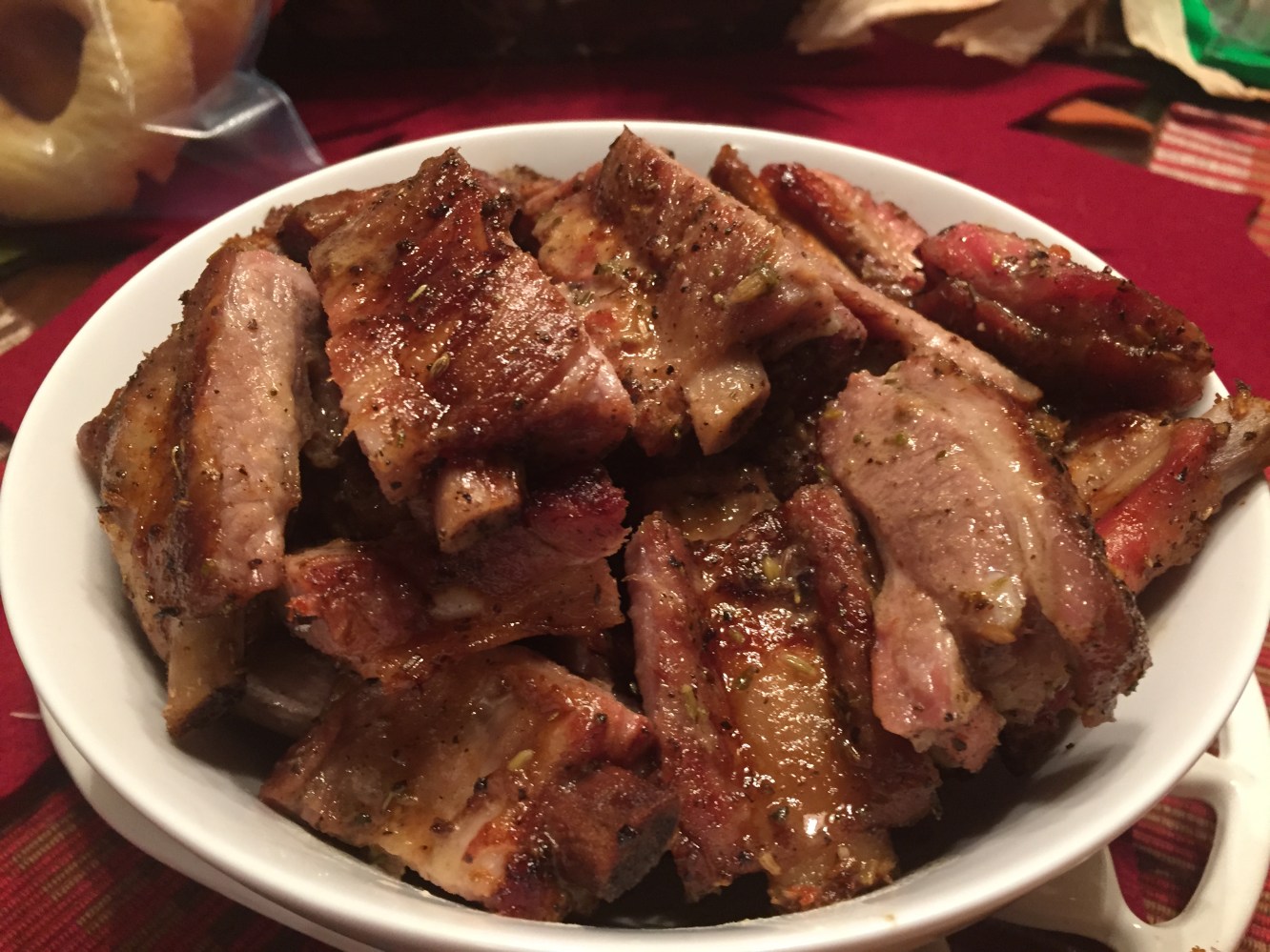 Hey!  It’s me!  It’s been a while, and for that I apologize.  Life caught up with me, but with the seasons changing I am drawn even more to the kitchen.  I love it when the mornings are crisp and the evenings are perfect to be standing at the stove or enjoying smells coming from the oven.  I’ve been making stock, bread, all kinds of things that we’re going to talk about.  Today, however, we’re talking about ribs.  Riblets.  The teeny and delicious version of spare ribs that are perfect for dinner for two, or for a crowd around a TV blasting sports.

I was looking for something to do with some delicious pork ribs that was different than your average rib-fare.  I thought about Korean BBQ, which is awesome, but done a lot.  I thought about Mexican ribs, but then I’d just want to throw them in a yummy stew which is delicious, but not necessarily UNIQUE.

Then, I saw the fennel seeds and it all started to come together. 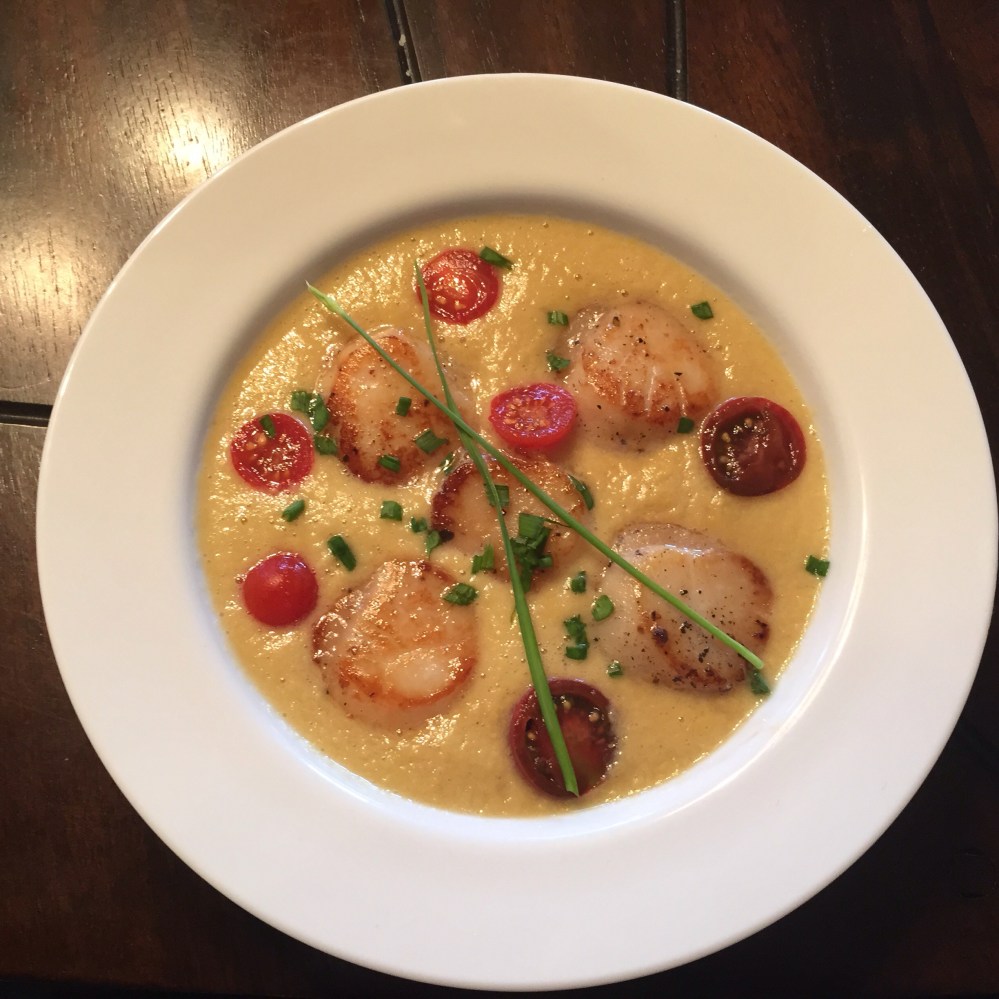 There isn’t much in this world that SCREAMS summertime than fresh, sweet corn.  I love corn.  I am telling you, I LOVE me some CORN!  It’s been a great deal recently around these parts and I had read a great recipe on Serious Eats about how to make a really good, velvety, creamy corn soup without having to add cream or butter.  It involved a pressure cooker, and I don’t use my pressure cooker very much so I had to give it a try.

Don’t go away just because I said “pressure cooker” — stick with me even if you don’t have one!  Seriously! 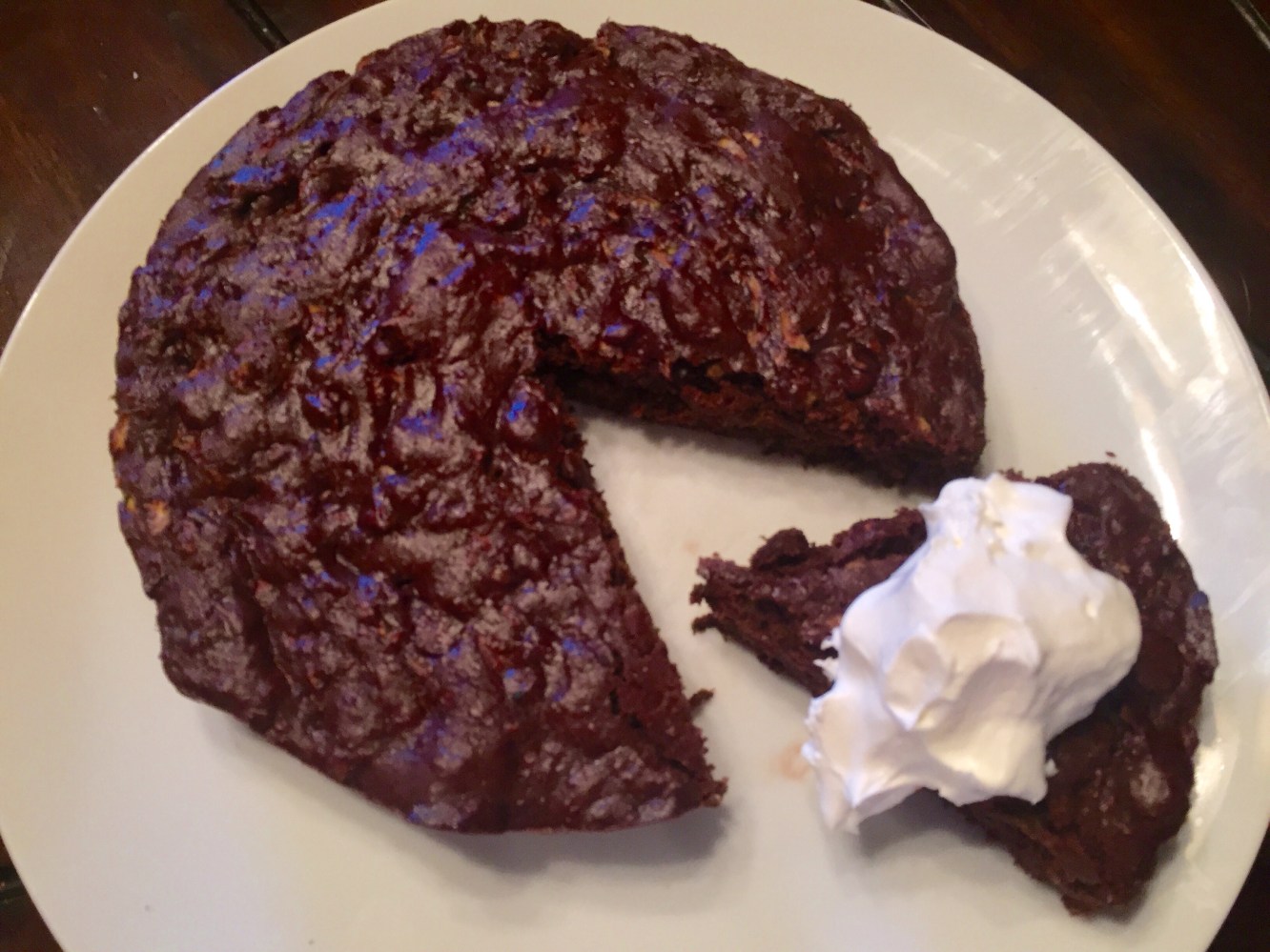 We have had an abundance of zucchini from the farm market this year, and it has all been delectable. I mentioned to John that I should make some zucchini bread, and he made a face like I was trying to feed him some horrible abomination!  I was determined to make a zucchini baked good he would devour, and today, I did!

END_OF_DOCUMENT_TOKEN_TO_BE_REPLACED 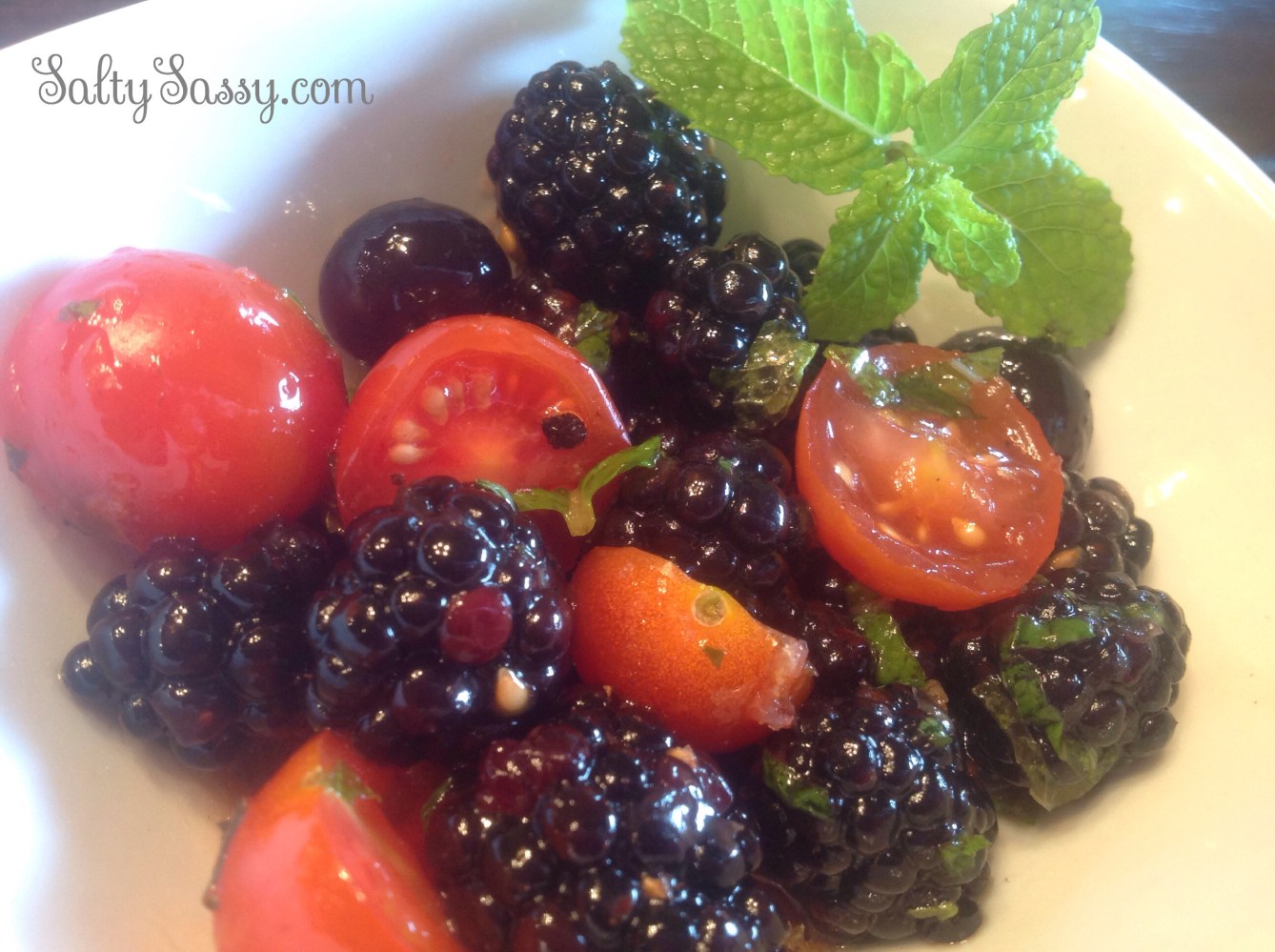 Summer salads are one of my favorite things. If you couldn’t tell, look through the salad archives. I am all ABOUT the cool, the crispy, the sweet and the tangy, and the fresh fresh fresh. Summer is the single best time of the year for salads, because we can experiment, we have access to fresh produce that we won’t see for half of the year, and it’s hot outside. Cool salads rule in the summer heat!

END_OF_DOCUMENT_TOKEN_TO_BE_REPLACED 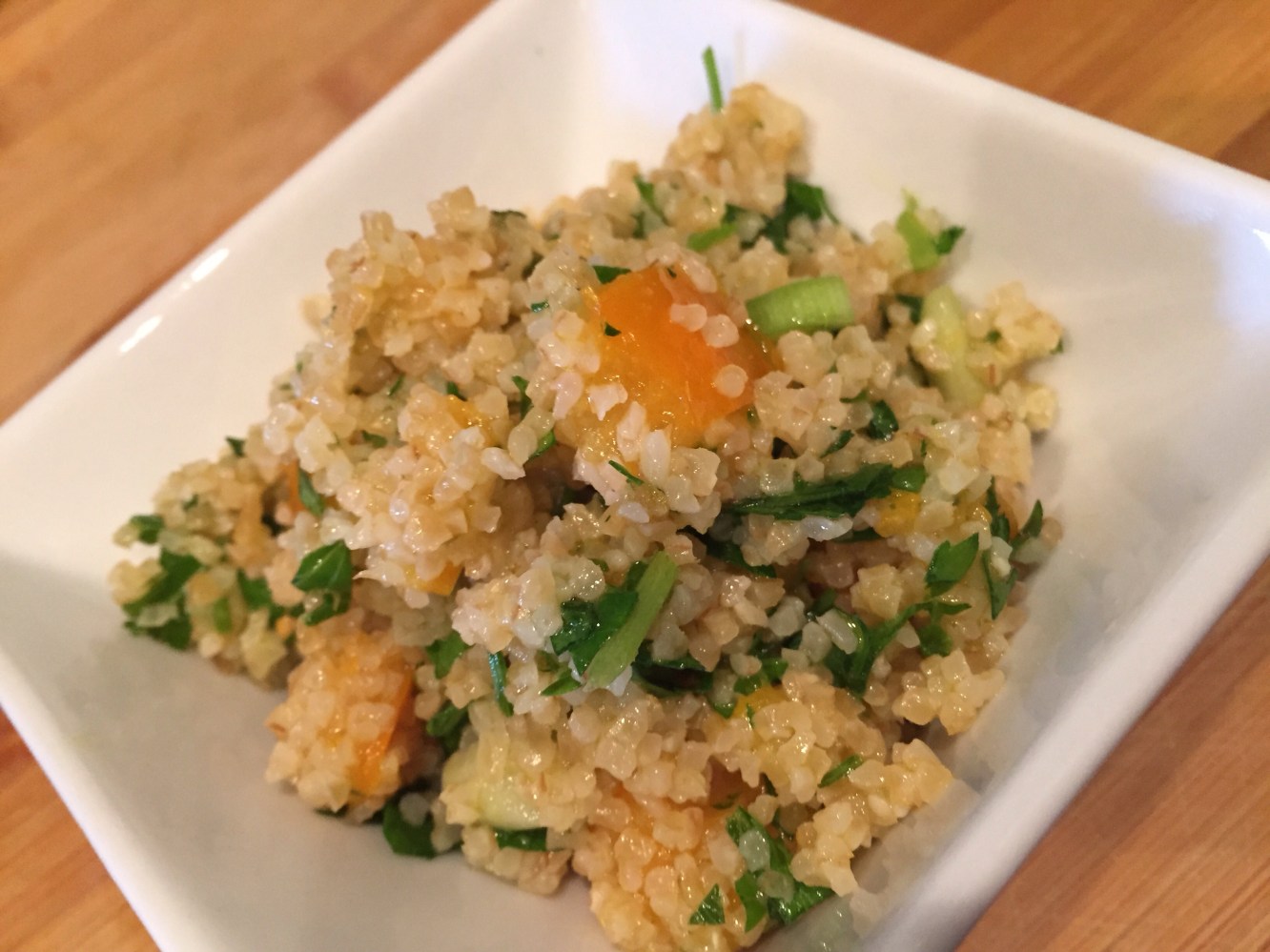 Summer is upon us, and one of my favorite things about the season are fresh, chilled salads.  They make a great snack, side dish, or even a light lunch.  This time of year, there are always at least one, and up to three or four, different kinds of chilled salads in our fridge.  One of my favorites is Tabbouleh, a Middle Eastern dish made with coarse bulgur wheat, tomatoes, cucumbers, and parsley.  It’s fresh and light, with the brightness of lemon juice, and I learned a tip from the amazing folks at America’s Test Kitchen that makes every bite a burst of amazing summer flavors.

END_OF_DOCUMENT_TOKEN_TO_BE_REPLACED 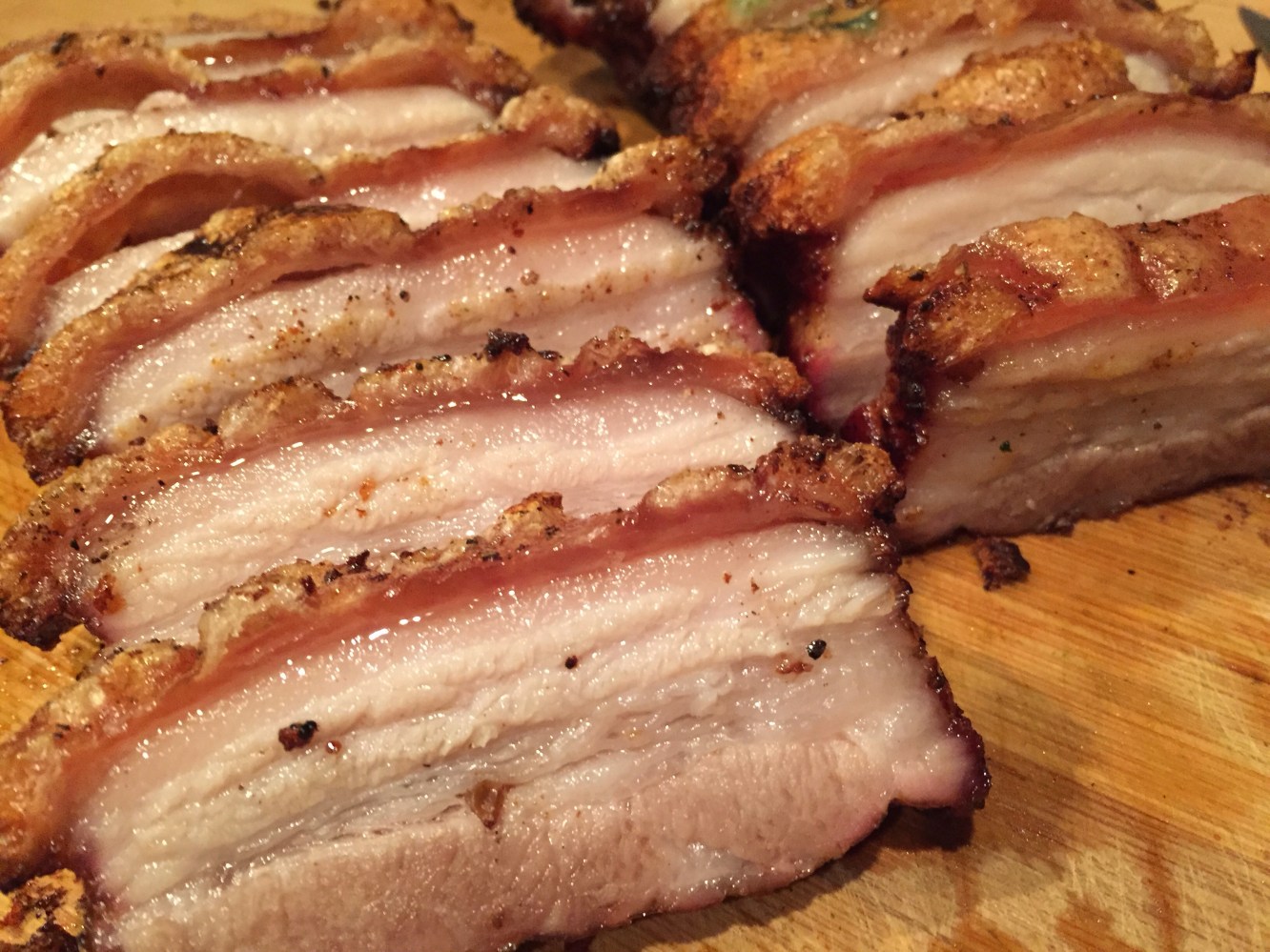 I love pork belly, from which bacon is born.  Sometimes I’m not sure which I like more, the salty-smoky-cured bacon, or the juicy, tender, and delicious pork belly in all its intact glory.  Pork belly is a super-versatile cut, especially if the skin is left on, and it’s absolutely fantastic by itself, in tacos, in breakfasty applications, or shining like a star as an entree.

This is a recipe that can be cooked in the oven, but I found the grill gives a nice dimension to the flavor of the meat, plus it helps me not heat up my entire house when it’s hot and humid outside in the summer!

END_OF_DOCUMENT_TOKEN_TO_BE_REPLACED 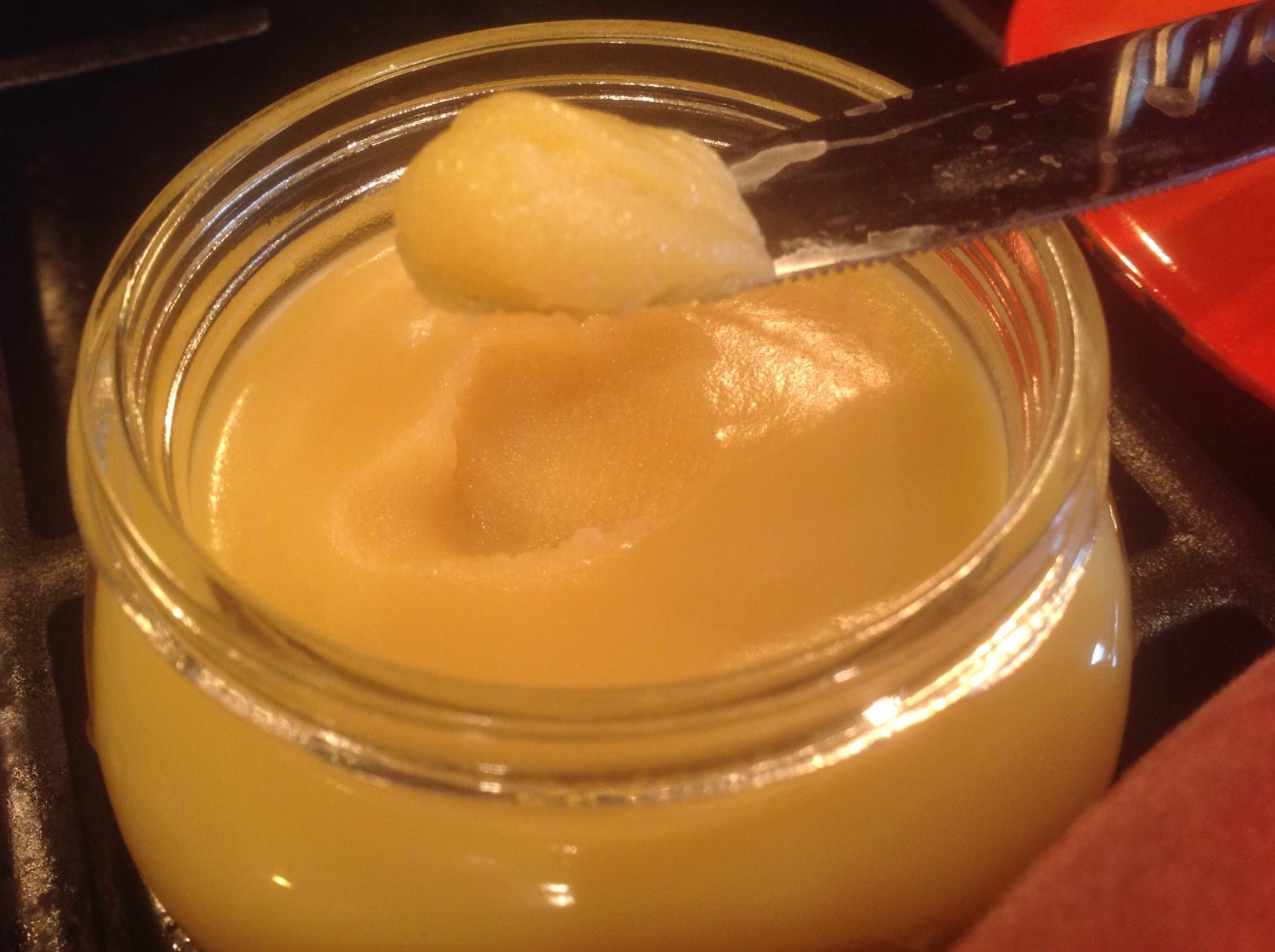 You might remember when we had a long discussion about the benefits of lard, and you may have thought me out of my mind when I described the health benefits over some cooking oils and other culinary fats. And then, hopefully, you scored some or made some organic pork lard of your own, and became 100% sold on using it in your own kitchen.

Another fat, which is actually very old but a lot of folks act like it’s new, is on the scene and it is a mean, not-so-lean cookin’ machine. I mean, let’s be honest, it’s FAT. They’re all FAT. So, let’s all remember everything in moderation, and even a little fat means so, so very much flavor (if it’s the right fat) and let’s talk about the buttery, nutty, aromatic deliciousness that is GHEE.

END_OF_DOCUMENT_TOKEN_TO_BE_REPLACED 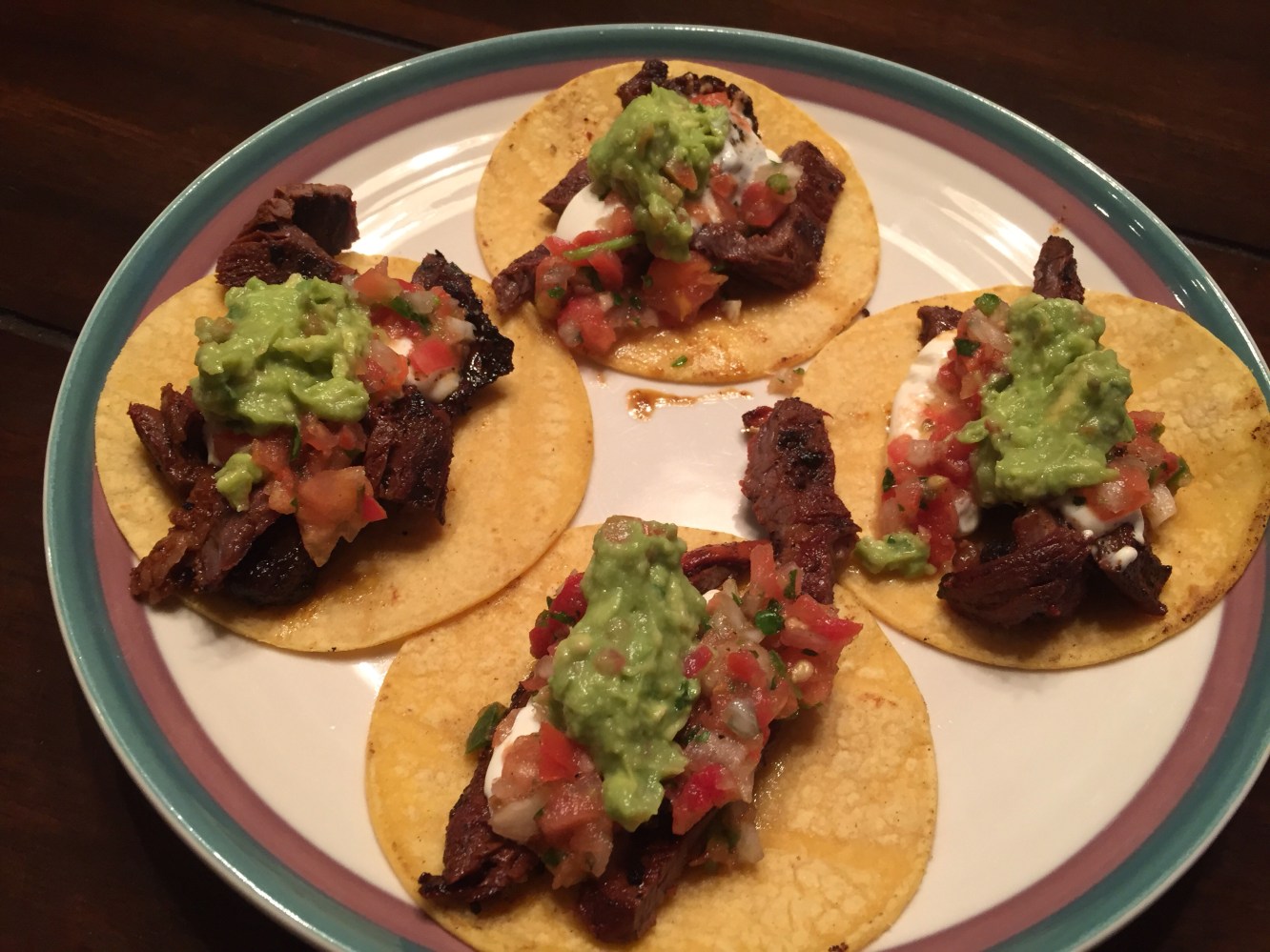 I love Mexican food.  There’s not much I love more.  It being Cinco de Mayo, I figured why not post up some guacamole?  I know Cinco de Mayo is more of an American, or Mexican-American holiday than is celebrated in Mexico proper, but any excuse for some tacos, chips & dip, and a cold beer or a margarita.

This recipe is probably the single easiest recipe for guacamole you’ll see.  It uses pre-made salsa (preferably fresh)  (Recipe for DELICIOUS SALSA!) and avocados, and that’s about it.  If you can cut open an avocado and open a jar, you can make guac.

Friends who have my guacamole recipe end up putting me in charge of guac at summer gatherings, which is more than fine with me since it takes me less than 15 minutes to whip up a batch!

Here’s a tip — when you’re seasoning your guacamole, keep in mind what you will be serving it with.  Guac that is going to go with tortilla chips won’t need as much salt in the recipe as guac that’s going to go with grilled chicken or something else that isn’t as salty as your corn chips of choice. 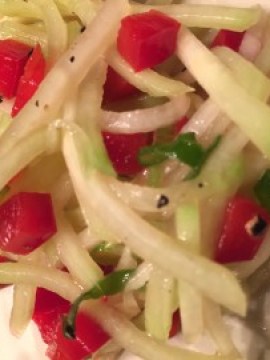 Chayote is a fruit/vegetable native to Mexico, which is known around the world for its versatility, nutrition, and just plain deliciousness.  It has about as many names as it has different recipes and ways to prepare it.  I call it a Squash, but it is so much more than that!