I love pork belly, from which bacon is born.  Sometimes I’m not sure which I like more, the salty-smoky-cured bacon, or the juicy, tender, and delicious pork belly in all its intact glory.  Pork belly is a super-versatile cut, especially if the skin is left on, and it’s absolutely fantastic by itself, in tacos, in breakfasty applications, or shining like a star as an entree.

This is a recipe that can be cooked in the oven, but I found the grill gives a nice dimension to the flavor of the meat, plus it helps me not heat up my entire house when it’s hot and humid outside in the summer!

END_OF_DOCUMENT_TOKEN_TO_BE_REPLACED

In case I haven’t previously made it clear, I am a fan of salads. I love them in the spring and summer, but also in the fall and winter. Pasta salads, slaws, cucumber-tomato salad, salads with grains and veggies, I love them all, no matter the season. So, as summer slips away and we move to cooler days, why not have another cold salad?

Mizeria is a traditional Polish cucumber salad that couldn’t really be easier to make. It’s basically 3 ingredients and takes almost no time. The name translates to “misery,” although I have absolutely no idea why — it’s one of the least miserable things ever! I have actually been trying to write this post for a couple weeks, because every time I made Mizeria salad, it disappeared within a day or two. I could take pictures of making it, but never had a picture of the finished product! I finally just made one enormous batch and bought myself a couple of days for pics, but it was still all gone within 3 days. This is addictive stuff. END_OF_DOCUMENT_TOKEN_TO_BE_REPLACED

END_OF_DOCUMENT_TOKEN_TO_BE_REPLACED

It’s the time of year when cable networks bombard us with grilling, chilling, travel tips for the best regional BBQ types, where to find them, festivals, cookoffs, and Pitmasters!  Everyone has a special rub, a spice mixture that they say sets their fire-cooked meat apart from everyone else’s.  That of course means that I too need to have my own magic dust, a BBQ spice mixture that helps stuff taste good!

First, I had to listen to all the BBQ guys and gals talk about their unique blends and figure out what they all had in common:  salt, sugar, paprika, and cumin. From there, I just had to figure out what would make my spice, MINE!

END_OF_DOCUMENT_TOKEN_TO_BE_REPLACED

For most folks, brisket is the quintessential cut of beef for a BBQ.  It’s traditionally a really economical cut because it’s tough and really only responds well to corning (brined in spices and usually boiled, corned beef) or the low-and-slow method of BBQ on a smoker or grill.  With beef prices soaring and the popularity (and huge size, 10 pounds or so) of beef brisket increasing, I’ve found brisket is about $2 more a pound than some other flavorful cuts of beef and who really needs 10 pounds of brisket?  BBQ beef chuck roast to the rescue!

END_OF_DOCUMENT_TOKEN_TO_BE_REPLACED

I am uber-lucky, and live next door to some astounding neighbors who are not only adventurous foodies, but also hail from pork-butt-smokin’-country.  This means every now and then, I get to inhale the aromas of wood on coals and sizzling pork fat as a big ol’ pork shoulder cooks low and slow to perfect, tender, smoky barbecue perfection.

It is maddening, in the most perfect and positive way.

All winter, I dreamed of smoking my own hunks of beef and pig and cluck and moo and fish and PORK.  Ribs, butts, picnics, roasts, bellies, and did I mention pork?

One impulse trip to Home Depot later, I came home with a MasterForge vertical water smoker ($60), a charcoal chimney, bag of Stubbs charcoal, and some apple and hickory wood chunks and started reading.  I browsed forums and recipes (and let’s be honest, I’ve seen every season of BBQ Pitmasters with that talented cuss Myron Mixon) and played around with some different things — lamb ribs, pork ribs, making my own BBQ dry rubs, and even a pork picnic roast.

As the long weekend approached, I was on a quest for the perfect pork butt for some pulled pork to feed friends and family before fireworks.  I found boneless butts everywhere, but my wallet threatened to kick me in the face if I couldn’t find a good deal!  I was hunting bargains.

As I was trying to figure out if they’d notice me trying to smuggle an 8 pound $25 roast out of the store under my shirt, a young butcher waved me over.  I asked him if there were any deals on pork shoulder, and what happened next amazed me.  The butcher let me know that “tomorrow,” pork rib end roasts would be on sale for $0.99 a pound.

He told me to come back early in the morning so he could “hook me up.”  We finished our dark alley black market pork negotiations and I went home to find out more about this Pork Rib End Roast.

Turns out, it’s a combination of a pork rib roast (almost like a little prime rib of pork) and one side of the pork shoulder where it meets the ribs. 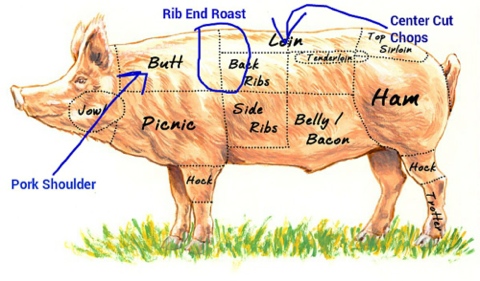 The next morning, I returned to the grocery half expecting to find the butcher wearing a trenchcoat with Super Secret Cheap Pork sewn into the lining.  Pssst!  Lady!  Wanna score some pig parts?

What he did give me were two beautiful pork rib end roasts and a total of 7.5 pounds of porky goodness.  I took them home, unwrapped them, slathered them with yellow mustard and sprinkled them liberally with my homemade dry rub, and wrapped them tightly in plastic wrap to marinate and start to soak up all those flavors.

I wanted to make sure they didn’t dry out on the smoker, so I also wrapped them each in bacon.  Hey, part of that roast is some of the loin and BECAUSE BACON.  Bacon is magic. 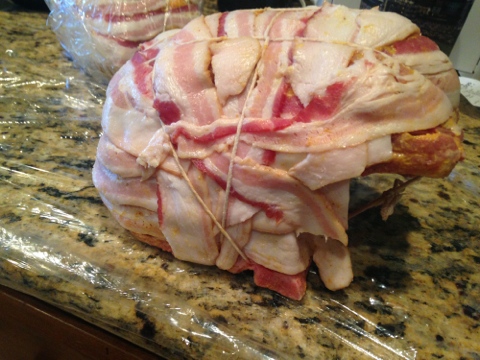 Early morning on the 4th, I started the coals and added some persimmon wood (I am learning that fruit woods really make nice smoke for pork and chicken) and put the two roasts on.  Six hours later, I had this: 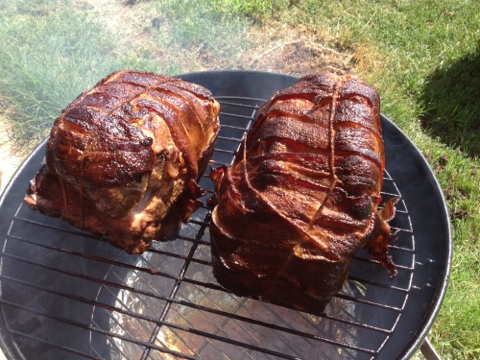 After letting them rest an hour wrapped in foil, I had this: 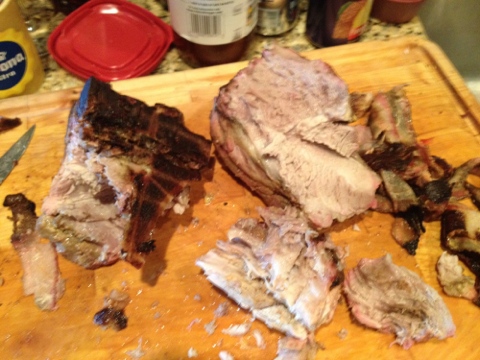 And after I shredded the pork with my spiffy bear claws, we had this: 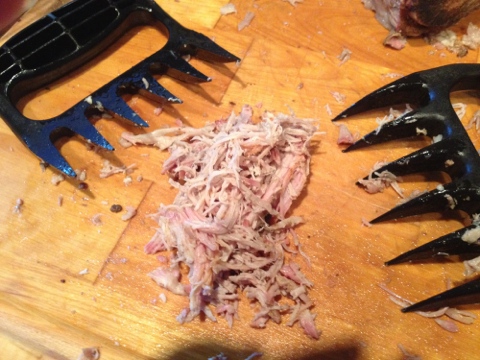 Then we had full bellies and got food drunk on smoked pulled pork sandwiches and homemade vinegar barbecue sauce and snacks and sides.  Deeeeeeeelicious!  Oh, pro tip: smoked bacon that then sits in a smoker for six hours so then it is SUPER SMOKED BACON is not deeeeeeeelicious, so it should just be pulled off and thrown away.  Take my word for it.  Learn from my mistakes.

Seven pounds of pork goes a long way.  There have since been pulled pork nachos, more sandwiches, pork as a snack, pork with BBQ sauce in a bowl with a fork, and I think next is pork tacos.  DELICIOUS PIG.

Do you have a smoker? Are you a fan of BBQ? I’d love to hear your BBQ stories!