There’s a running joke here at Casa Sass that my winter Pozole cooking starts at the first sign of Spring, when I must plant the hominy corn in soil tended for generations; that I start raising the baby piggies and growing the peppers, onions and oregano; and if I pushed it, I am pretty sure I would be told I mine my own salt.  That’s because Pozole is one of my favorite things to eat, and probably my favorite thing to cook.

When I really “go for it” at Pozole time, I have a 5 gallon stock pot, make my own pork stock, and start from scratch with everything.  No cans, no jars.  It’s amazing, but it’s also very time consuming, and not exactly “spur of the moment” cooking!

Not long ago, one of my oldest and dearest friends asked me if I have a “simple” recipe for this amazing, brothy, rich red soup, and I had to pick my brain for some shortcuts.  Having done that, I think I came up with a really good foundation for a quick version, an easy Pozole that anyone can make with ingredients easily found at the grocery.

Here’s how we’re going to cut this down to size:  convenience ingredients.  Don’t have time to make stock?  Chicken stock comes in one-quart boxes (so does veggie stock). Don’t have time to hydrate and boil hominy corn?  It comes in a can.  Never made your own chile sauce?  No problem, because now (as in, new on the market in the last few months) you can buy it ready-to-go in a jar!

Herdez, a company that makes lots of different and delicious Mexican-food ingredients for the US market, has come out with a new line of cooking sauces.  Among them is HERDEZ Red Guajillo Chile Cooking Sauce, which is actually really good.  I picked some up at the supermarket while trying to find shortcuts for my aforementioned friend, and was really surprised to find that it tastes a LOT like what I would spend an hour making myself.  Bonus, I don’t have to dirty up a pot, a bowl, a blender and a strainer!  I am in NO WAY compensated by HERDEZ (or anyone) for my recommendations — but hey, I wouldn’t argue at being a spokesperson, y’know? JUST SAYING!  — I just share these specifics with you guys because I think they’re good quality stuff, and I am a very hard audience.  If it shows up in here somewhere, it’s because I really swear by it.

Theres two other things in this quick recipe that truly will make your Pozole taste like you tilled the land six months ago in preparation:  pork neck bones and/or rib bones, and Mexican Oregano.  Not Greek, not Italian — MEXICAN oregano.  You should be able to find this at the store where cellophane packets of specialty spices hang on a rack, or if you have a Latin or Mexican market, it will be front and center.

As far as the pork goes, I’ve sung the praises of the super amazing farm fresh pork we get from Double R Farms here in Oklahoma.  If you have the chance to get pork from a local farmer, DO IT!  The cuts used in Pozole are inexpensive cuts, and it will be worth it.  If you don’t have a source of pastured pork, use your best judgment and choose meaty neck bones and marbled pork “stew meat” for this.  Too lean, and it will come out of the soup dry and tough.  I used Double R Farms pastured pork, neck bones and stew meat, for my Pozole today.

If you can set aside some time to cook the pork bones in the stock for about an hour before putting the rest of your soup together, you will have a really rich, porky broth.  It really makes all the difference.  You CAN skip that step if you are super crunched for time, but I think it would come out to be an “okay” version of Pozole rather than a “great” soup.

When the weather turns chilly and you’re hankering for a comforting, satisfying soup for you and yours, I hope you’ll give this a try.  If you can open a can, you can make this, and you’ll come back to it again and again.  Buen provecho!

"Quick" Easy Pozole -- Mexican Pork & Hominy Soup
An easy Pozole recipe made with convenience ingredients, that tastes like it simmered all day!
Ingredients
For the soup
For Service and Garnish
Servings:
Instructions
Recipe Notes

For more pictures of the process, visit the blog at www.saltysassy.com. 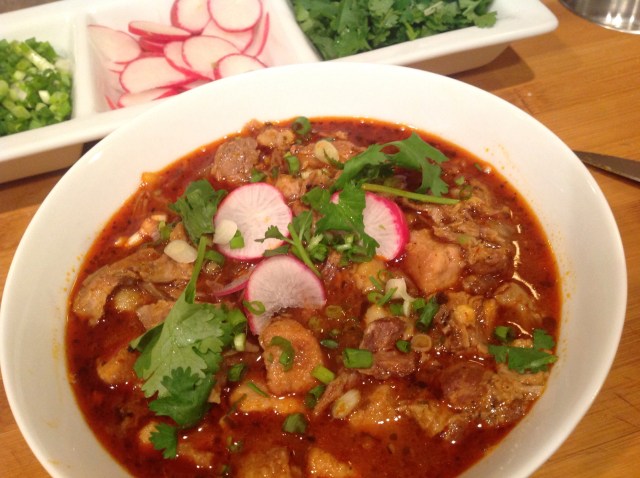