In case I haven’t previously made it clear, I am a fan of salads. I love them in the spring and summer, but also in the fall and winter. Pasta salads, slaws, cucumber-tomato salad, salads with grains and veggies, I love them all, no matter the season. So, as summer slips away and we move to cooler days, why not have another cold salad?

Mizeria is a traditional Polish cucumber salad that couldn’t really be easier to make. It’s basically 3 ingredients and takes almost no time. The name translates to “misery,” although I have absolutely no idea why — it’s one of the least miserable things ever! I have actually been trying to write this post for a couple weeks, because every time I made Mizeria salad, it disappeared within a day or two. I could take pictures of making it, but never had a picture of the finished product! I finally just made one enormous batch and bought myself a couple of days for pics, but it was still all gone within 3 days. This is addictive stuff.

Mizeria is made from thinly-sliced cucumbers, sour cream, and dill. It’s low calorie, especially if you use light sour cream, and you could also use regular or nonfat plain Greek yogurt. The juices from the cucumbers mix with the creamy dairy and make a light, pleasant dressing that only gets better with time. It’s also simple enough that you can put your own little spin on it. I’m notorious for doctoring recipes, but the only thing I do with this Mizeria is a little black pepper and dehydrated onion, because I love onions so much.

This cool, creamy salad reminds me a lot of Greek Tzatziki sauce, and it is fantastic with spicy foods, a wide variety of different cuisines, and on its own as a snack.  Try it with a nice crusty roll to soak up some of the juice! 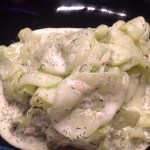