HOMEMADE.  PORK.  CRACKLINS.  Do I have your attention yet?  Calling all Paleo / Atkins / Baked-not-fried / I-Love-Snacks people and Secret Pork Rind Lovers:  I MADE PORK RINDS.  I know, right?  WE CAN MAKE PORK RINDS.

Here’s the kicker:  Mine are baked.  BAKED.  How can this be?  Delicious crunchy pork rinds that are BAKED?  Done and DONE!

One of the bonuses of getting pork from Patrice at Double R Farms, who supplies heritage Berkshire pork through my local farmer’s market, is that she can have things most people don’t want.  Pork skin is one of those things.  I was THRILLED to find out she had a package of pork skin that was removed from the hog in processing, just waiting to be made into something delicious.  Lots of things to do with pork skin.  Wrap it around an otherwise lean pork loin roast and bake it to crispy brown perfection, for example.  Or MAKE PORK CRACKLINS.

I am using a lot of all caps today, does that demonstrate how excited I am about this?

For those folks who haven’t ever had pork cracklin/rinds besides what comes out of a snack chips bag, here’s what they are:  pork rinds are the skin of the hog and a small amount of the fat layer under the skin, cooked until the fat is rendered out and they puff up.  Usually, these are deep-fried, either in oil or in pork fat/lard.  The ones in a bag from the grocery sometimes have preservatives and stuff on them to keep them fresh longer, it all depends by brand.

As bad for us as those are/seem to be, they’re also pretty darned yummy.  John loves them as a “travel snack,” and we always have a small bag in the car when we take a road trip (or stop at a truck stop along the way and get some).  That’s really the only time we let ourselves have them, because DEEP FRIED PORK FAT.

Here’s the downside:  commercial pork rinds are made from commercially-farmed pigs.  Commercially-farmed pigs are given hormones, antibiotics, and other medicines, and eat stuff pigs aren’t really supposed to eat.  All the bad mojo from all those things gets stored in a pig’s fat, which the snack companies first render off the skin and then use it to fry the rinds in.  You could be getting snacks fried up in a big ol’ vat of livestock meds and hormones.  YUM, right?

I knew there must be a way to bake up a healthier version of the crispy pork rinds, using pastured pork (which doesn’t have all that processed crap in its fat, just superhealthy pork fat high in Omega 3).  It had to be simple, because when I bake a roast with skin-on, I end up with delicious cracklin after the roasting.  I just had to make it happen with skin only.

I did it!  The baked pork cracklins turned golden brown, rendered out nearly all the fat, and got puffy, crunchy and delicious.  A quick sprinkle of salt and some seasoning made them extra delicious.  I’m going to feel much better about having cracklins from time to time, knowing I make them myself and I know what is (and is not) in them.  Here’s how easy it is:

After one hour in the oven: 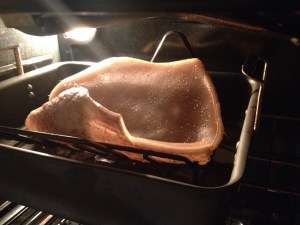 After two hours in the oven: 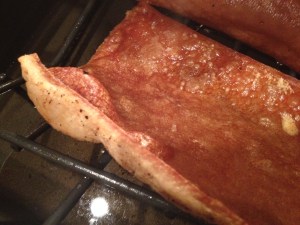 After three hours in the oven: 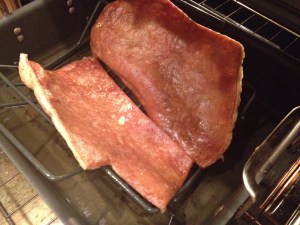 Ask at your grocery, at your butcher, at your farmer’s market, or ask a farmer — pork skin isn’t something that everyone in the world wants to buy, but I bet you’ll find a source because pork comes from hogs, and hogs have skin.  It’s an inevitable part of the “making pork chops” process.  Worse comes to worse, there’s got to be an online source for good pork and things like pork skin.  Google “Pastured Pork Rind” and “Pastured Pork Skin,” maybe you’ll find a source close to you or one that will ship!  We can find just about everything on the interwebs, right? 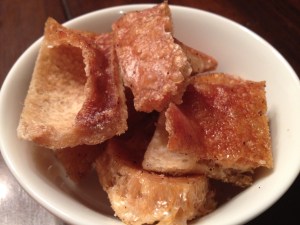 It is best to use the skin and fat from pastured hogs in this recipe, rather than commercially-raised/supermarket hogs.  Hogs and other animals store toxins, medicines, hormones, antibiotics and chemicals in their fat layers, so any bad things a commercially-raised hog eats could be passed along in the fat that is connected to the skin.

Organic or pastured hogs will not have this problem, and their fat is actually healthier than canola oil, corn oil, vegetable oil, butter, margarine, or shortening.  It is high in Omega 3's and has less saturated fat than butter.

Pastured hog lard has 20 percent less saturated fat than butter; it's higher in monounsaturated fats which are said to lower LDL cholesterol; and it has zero trans fat.  It is high in Omega 3 fatty acids and is an excellent source of Vitamin D because happy hogs have been out in the sunshine.  There's a reason our grandparents grew up eating it and didn't suffer ill effects.