Lard.  I said it, I said that four-letter “L” word.  STAY WITH ME, don’t be scared! If you make it through today’s blog, you’re going to learn all the things I’ve learned in the last month or two, and you might even come away inspired!  Come, friend, let us travel to the land of porky fatty goodness.  Let’s talk about how GOOD lard is for you (!!!) and how amazing it is.

I swear.  No seriously, I swear it’s good for you.  I’m not just blowing sunshine up your butt, this is the real deal!

I’m going to clarify something before we get started (no, LARD IS GOOD FOR YOU, that’s not — seriously.  Don’t give up on me yet) and be specific.  Storebought lard (Manteca) in tubs or loaves or bricks from the grocery is not the kind of lard I’m talking about.  That stuff is processed and has chemicals and stuff added to it to make it live a longer life in your kitchen.  Chemicals are bad, mmmkay? It is also by default, full of all the chemicals and antibiotics the commercially factory farmed pigs were given.  This is just simple biology — our bodies store all those toxins in our fat layers.  For this, you’re going to need PASTURED and preferably organic pig fat.

Now, there are lots of farms and collectives online where you can buy either this type of pork fat for making your own lard (cheaper) or the actual rendered lard from their pastured pigs (more expensive).  If you google “buy pastured pork lard” you will be hit with a never ending stream of links and resources to help you acquire it.  I’m lucky, my pastured pork provider Patrice (whew!) from Double R Farms has fat from her hogs and I could pick it up directly from her.  Check at farm markets and local farm co-ops if you can, and I bet you will find some.

Or buy it.  That’s fine.  I’m not going to make you grow pigs.  Just be sure of what you’re getting.

Lard has been used for thousands of years, and by all of our ancestors, for cooking, baking, and frying.  It’s really in the last 60 years that we have moved away from lard, mostly due to the low-fat craze and brilliant marketing by companies who take things that aren’t food, and using chemicals and industrial processes, turn them into fats that are now used to cook food.  Canola? That’s rapeseed oil.  Processed rapeseed oil.  Crisco? Cottonseed oil.  COTTON.  SEED.  OIL.  Don’t even get me started on margarine.   Lard is better for you than canola oil, vegetable oil, corn oil, peanut oil, margarine, vegetable shortening, tallow (beef fat), and butter.  It even has a benefit or two over coconut oil, which is pretty darned good for you.

I didn’t mean to sound all preachy, but this is all stuff I was really surprised to learn.  I hope I’m shedding some light on some of this for you, too.  If you already knew this stuff, you’re a star!  For real!

Pastured Lard is not quite shelf stable, but it freezes beautifully and won’t go bad in your fridge before you use it.  It has a neutral flavor, has a very high smoke point (which makes it great for frying), is higher in vitamin D than essentially all other food sources except cod liver oil, and who the heck wants to eat cod liver oil? It is also high in omega-3 fatty acids (the good ones) and low in omega-6 (the not so good ones).  It has a higher percentage of monounsaturated fats than saturated fat — it has less than one-fourth the saturated fats of butter.

Here’s more info, and you can take it from a real doctor if you don’t want to take my word for it!  You can also check this link for another lard info and tutorial from my good friend Andrea, from whom I learned a lot of this lardy goodness.

Okay, so, have I sold you on getting some pastured lard?  Excellent.  Have I sold you on making your own? Wait, what? Was that my outside voice?  When I learned how simple this process is, I immediately had to try making lard. I did it and didn’t screw it up, so I figured anyone can do it.

This is so simple it doesn’t even need a recipe.  Maybe a couple pictures.  This is some SUPER EASY STUFF.

1) Get some pastured pork fat.

2) Cut it into little pieces.

Is that easy enough? How about some visuals?

Step one:  Get some fat.  You should end up with about a pint of lard per pound of fat. 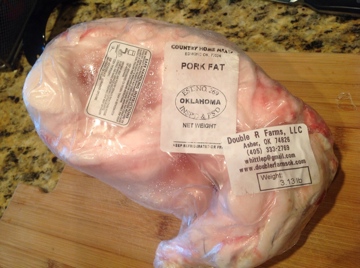 Step two: cut it in pieces.

Step three: crock pot on low with half a cup of water. 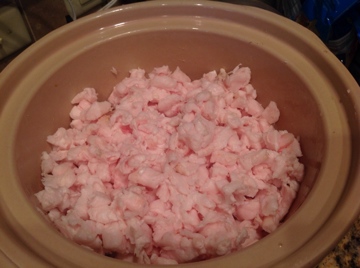 Step four: Cook on low, stirring sometimes to make sure it’s all rendering (melting) evenly.  When it’s all melted strain it, and it’s lard.  This is a multi hour process; I had 3 pounds of fat and it took 5 hours to make 3 pints.  You want to go reeeeeeally slow and steady.  If you don’t have a slow cooker, use a heavy-bottomed pan on low heat.  The lard will be clear and slightly golden while it’s hot, but as it approaches room temperature it will turn bright white. 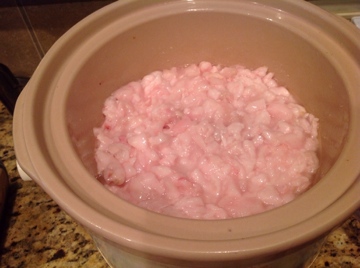 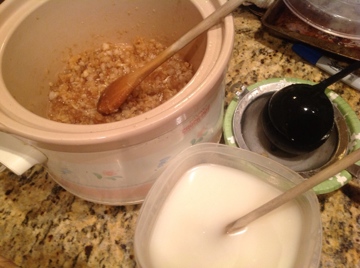 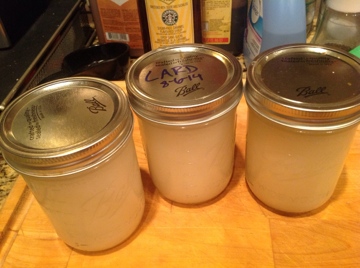 I tell you what, it’s a whole new world!  A delicious world of pig fat!  Flaky pie crusts and delicious savory stuffs,  here I come.  Or, is it here WE come? C’mon!

Please tell me you’re gonna get some lard.