One of my favorite things to do in the Summer is explore farmers’ markets.  I am originally from Arizona, which grows some produce here and there, but as Sam Kinnison said — it’s a desert.  Nothing grows here.  When I moved to Oklahoma, I was excited to discover that yes, Virginia, there ARE green fields that grow delicious juicy snappy fresh crisp fruits and veggies, and they could all be mine.  MINE.

When the weather starts to warm, I start stalking farmers’ markets waiting for opening dates and schedules and lists of who’s selling wares.  I had to start getting picky, because some “markets” were a parking lot with a few card tables and folks selling crafts and Tupperware.  Some had some actual local farmers with fresh veg, but they’d be next to someone who backed up a pickup truck full of cantaloupes from Texas or something equally not cool.

The man’s son is visiting us for a few weeks, and I’m learning what it’s like to have a 16-year-old with a hollow leg in the household.  The good news is, there’s not much he won’t eat so I don’t have to deal with a picky eater.  The worse news is, he basically will eat everything and still be hungry.  Growing boy!  It’s Pork CSA week, and I needed to head down to Brooks Market to pick up delicious heritage pork and farm eggs, so I decided I’d also load up on some local produce while I was there.  I grabbed my Eco-friendly canvas bags and headed into town, because that seems to be occasionally how I roll.

After loading up on heritage pork from Patrice at Double R Farms (in case you’re interested, because omnomnom:  Italian Sausage, a pork shoulder, some pork cutlets, pork chops, ground pork, and three pounds of fresh pork fat — yes, I have a specific plan for the fat and I promise I’ll show you), I saw watermelons.  Not supermarket basic watermelons, YELLOW FLESH WATERMELONS.  I hadn’t seen one of these golden beauties in years, so I was all over it. 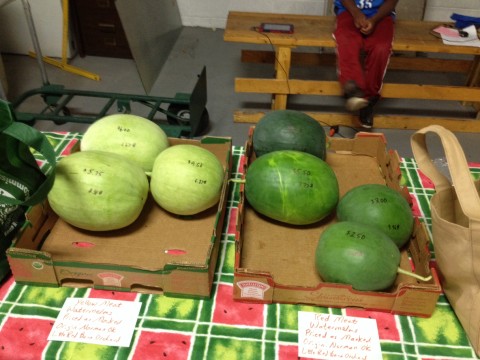 That’s the yellow ones on the left, and the red flesh melons were on the right.  To give you an idea how juicy they are, the lower right watermelon is about the size of a cantaloupe, and it weighs over five pounds.  I bought it, and the large yellow-meat melon on the left from Deb at Windeater Acres, and also ended up having a very nice chat with her and picking up some baby yellow squash, pickling cucumbers, and another HUGE watermelon that is feed-a-hollow-leg sized.  Perfect!  The squash are so versatile, I’m not sure what I’m doing with them yet.  I’ve been craving half-sour pickles, so those crispy cukes will soon be fermenting on my kitchen counter.

As the man loves yellow squash, I also decided to try something new and got a small jar of yellow squash pickles from Mittie’s Kitchen, a family business focused on taking the fantastic ingredients and making them into delicious products for the rest of us.  I can’t wait to try them.

I took three canvas bags with me, because I figured if I took four I would fill them all.  True to form, I had almost filled all three and was then seduced by the smallest sweetest little baby new potatoes from Dustin at 10 Acre Woods.  I was picking and choosing my taters, when I noticed a basket of gorgeous little heirloom cherry-sized tomatoes in a rainbow of colors.  I had to have them!  The potatoes will be a side dish with ribeye steak tomorrow, and the tomatoes will be made into a delicious tomato-and-cucumber salad, which is a favorite here at Casa Sass.

I left the market full of great products and great conversation with the folks who raised them, and texted the man to tell him he’d never believe what I was bringing home.  He helped me carry in the haul: 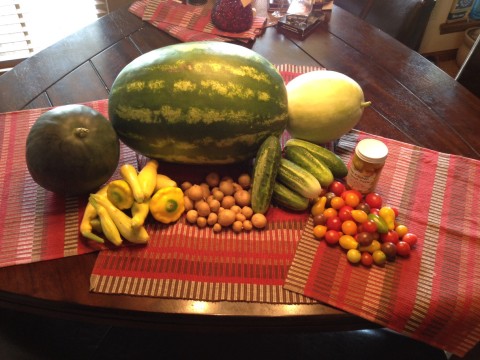 I promise, the pics look much higher resolution when they’re not on the blog.  /sigh 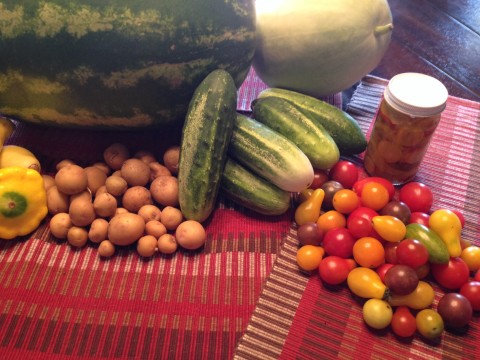 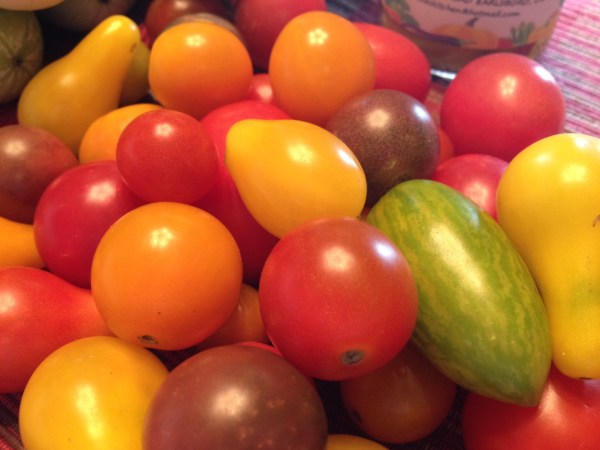 Man oh man, am I going to have stuff to write about this week.  So hey, everyone should hit a farmers’ market at least now and then during the summer.  You never know what you’ll find — real “spring onions,” squash blossoms, heirloom produce, baked treats, fresh cheese — if you find one new thing to fall in love with, then it’s worth the trip.  If you don’t live in Oklahoma and can’t visit Brooks Farm Market, then please do yourself a favor and Google around for a market near you.  Then, I won’t be mad if you come back here and tell me how much of a market rock star you are and share your list of goodies with me.  Deal?  DEAL.