Cold, crisp, bright fruit and vegetable salads are one of my favorite things during the summer, but some of them enjoy a place in our kitchen year-round.  Here’s one that is part of the menu at Casa Sass most of the time, and I hope you’d enjoy it as much as we do.

I come from a long line of German cooks, and one of the favorites around my house growing up was a type of marinated sliced cucumbers and onions, and they’re bathed in a very vinegary brine with salt and pepper.  It’s still on my “great stuff to eat” list, and I tend to make it around holiday meals since we always had it at larger family meals at my mom’s house.  I don’t remember exactly when I started making this variation, but I have learned that other people also have their own versions of it, so it’s not the most unique side dish in the world.  However…

This is cucumber-tomato salad.  There are many like it, but this one is mine.

I’ve made this salad for a long time with regular cucumbers and grape or cherry tomatoes from the grocery.  If I’m feeling splurgy, an English cucumber (those are the ones in the produce section that are wrapped in plastic, and sometimes they call them seedless) or some “baby cucumbers” or pickling cucumbers are a nice change.  When the cherry tomatoes don’t look good, I go for the best looking regular-sized tomatoes — red and ripe.  I just cut them into chunks about the size of a halved cherry tomato.

Since it’s summertime, and since I have access to Brooks Farm Market, I am making the salad with beautiful heirloom tomatoes and fresh farm cucumbers from Windeater Acres and 10 Acre Woods.  I also have some super-sweet vidalia onions and they’ll be a perfect complement, I think. 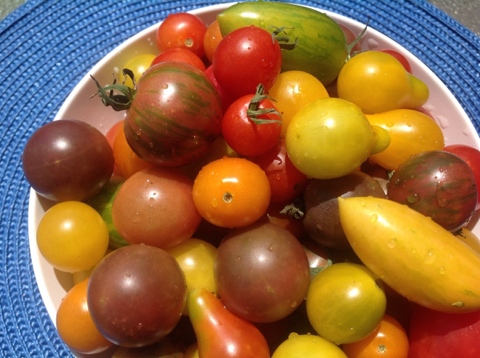 The salad couldn’t be much simpler:  cut your cherry tomatoes in half (or chop your tomatoes). Cut yor cucumbers into chunks around the same size as your tomatoes.  If there’s a ton of seeds, cut the cuke in half the long way and scoop the seeds out, then cut it into chunks.  Onion is really to taste, but with a pound of tomatoes and one large cucumber, I will use half a small onion or 3-4 green onions sliced really thin.

Put all the veggies in a sealable container and sprinkle with 1-1.5 tablespoons (big pinches) of kosher salt and 10 grinds of pepper, and mix.  Let them sit for about 15 minutes so the juices start to come out and meld.  Then drizzle half a cup of oil (veggie, olive, whatever you like) and 1/8 to 1/4 cup of a good vinegar over the veggies.  I like balsamic vinegar and olive oil. 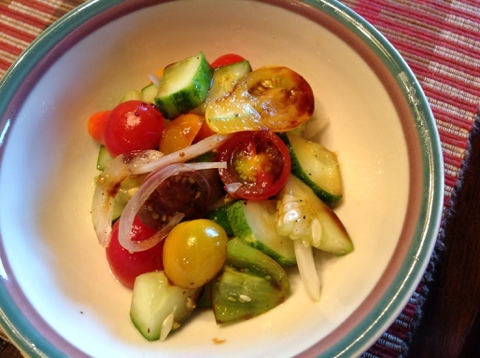 Mix it up again and you’re done!  So easy!  EASY PEASY!  We eat this for snacks, with lunch or with dinner.  Don’t tell the made-from-scratch police, but sometimes I just cut up the veggies and toss them in some kind of Italian salad dressing.  This makes a tangier salad, but depending on the crowd you’re feeding it could be just right. It’s also an easy chore to give to someone who wants to help in the kitchen.  “Put about a third of this bottle of dressing on these veggies, could you? Thanks, you’re awesome!”

It seems I keep coming back to the idea that the simplest prep of fresh veggies is still the best!  Enjoy!