A dear friend came to visit last week, and I couldn’t remember the last time I’d made him a meal, if ever.  Since he’s a bachelor and a guest, I asked him to let me make a nice home-cooked dinner.  He’s fond of pot roast, and as such, tonight at Casa Sass it is a beef-o-rama!  Oh yes, it’s easy enough to throw a roast in the crock pot, but I wanted to shake it up a little bit and go a little overboard.   If you’re gonna splurge, splurge big!

Therefore, I’m here to introduce you to my friends Chuck, Shorty and Ox.  These guys can be a little tough for some folks, but once you get to know ’em you learn that they’re actually softies!  Also, super delicious.

Braising beef is probably one of the easiest comforting meals anyone could it together.  It is for the most part, a one-pot wonder.  It’s 2 pans if you are using a slow cooker/crock pot, which I am today.  You can also throw this together in a whiz-bang snap in a Dutch oven, and we’ll discuss both methods in this blog.

Braising is a low and slow method of cooking meat in some liquid.  If you’ve ever thrown a hunk of meat and some veggies in a crock pot with a splash of water or broth, you’ve braised.  See, look at you and all the braising!  Good job!  I do a lot of braising/slow cooker meals in the winter, because they’re just super duper comforting.  Plus, autumn veggies like root vegetables, hard squash, and the like take very well to the slow, moist cooking method.  There aren’t many things better than starchy root veggies and luscious, soft beef swimming in some unctuous brown broth or gravy.

Plus, let’s be honest — throwing seasoned meat and veggies in a slow cooker and coming home to a house that smells like your mom’s kitchen is easy AND amazing.  Heavy on the easy.

Now that we’re ready to go, step one is finding the right meat.  If you’re unfamiliar with cuts of beef that are best suited for a braising or pot roast cooking style, check some labels — for example, my grocery will label certain cuts with descriptive terms like:  FOR POT ROAST! Or, FOR THE GRILL!  Today, I also saw FOR OVEN-ROASTING!  A nice rule of thumb gets back to the conversations we have had before about active muscles and passive muscles on the delicious cow or hog.  Muscles that get a lot of work tend to have more flavor, but they also are tougher muscles because of the work they do.  Grilling and hot oven roasting methods aren’t going to work out best for those flavorful working muscles, but they’re great for steaks, chops, and most poultry.

That means slow cooking methods that let those muscle fibers relax and the connective tissue start to get melty and delicious, are the best way to handle these.  Think pulled pork BBQ, or a yummy pot roast, or the tenderness of perfectly-cooked ribs.  We want to make a delicious little muscle relaxing beef spa treatment for those poor overworked muscles and let them loosen up in a tasty hot tub.   Mmmmmmmm.  Hot tub.

For our “experiment” today, I got three kinds of braiseable beefy delights:  a small chuck roast, which most of us would recognize as a “pot roast”; some beef short ribs; and some oxtail (which is the tail of either sex of cow, male or female).  These meats all have different structures, which means they will all cook up differently from one another even if we use the same method and the same cook time.  The process for making all three of these darlings of beefosity will be essentially the same: 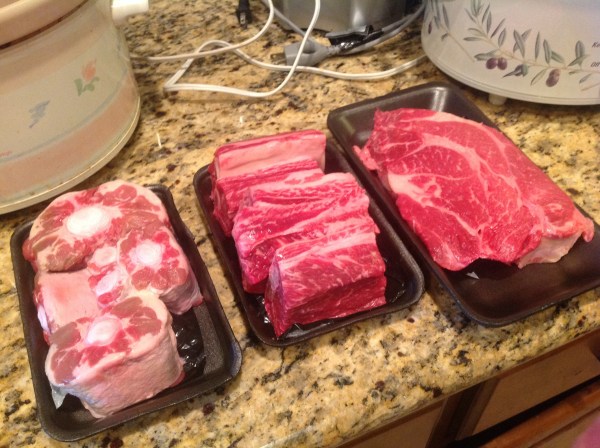 From left to right, Oxtails, Short Ribs, and Chuck Roast.  Wait, are you kind of hung up on the oxtail thing?  I mean, it’s okay, I used to be a little ew about them too, before I actually tasted slow cooked oxtails.  These cross sections of the cow tail are like the beefiest most tender pot roast you ever had ever.  The outsides, that’s fat mostly.  The middles, that’s cartilage or bone and some marrow, which adds to the braising liquid like fatty savory delicious beefy butter.  The skin of the tail is long gone and there’s nothing to be squeamish about.  Oxtails are soul food!  For the most part, cow meat is cow meat.  There’s truly not much difference between the meat on an oxtail or the meat on that chuck roast.  It all tastes like beef, because that’s what it is.  If you’ve never had them, I hope you will be willing to try them sometime when you’re slow cooking some stuff.  You’ll become a fan. 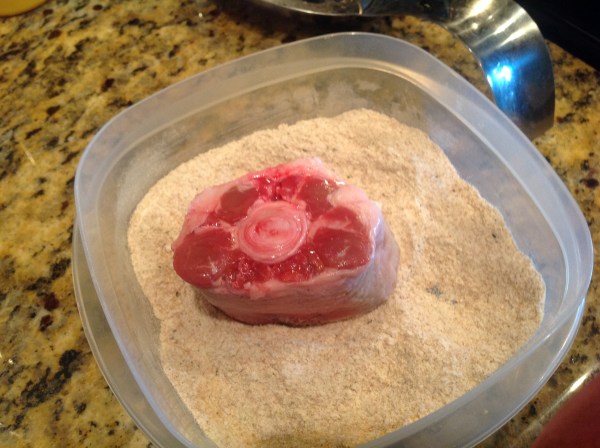 3)  Heat up some oil or fat (I used my homemade lard!) in a hot pan and put the floured pieces in. 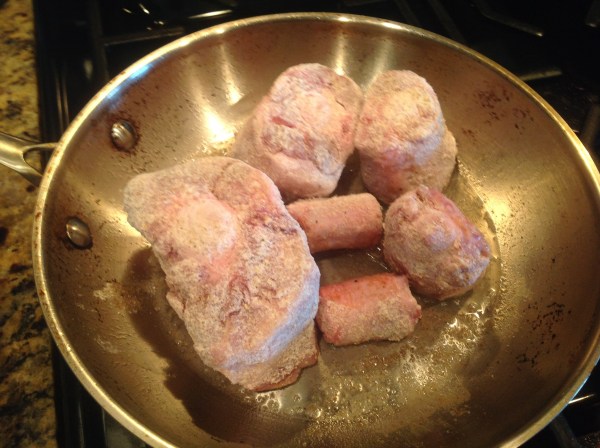 Don’t overcrowd them, do this in batches.  We want these to get a beautiful, browned crust.  If you overload the pan, they will just give off a lot of juice into your pan and then we will be boiling them, which is definitely not the way to go.  In the spirit and words of one of my favorite chefs, Anne Burrell, BROWNED FOOD TASTES GOOD.

** If you’re using a Dutch oven and not a crock pot, brown your meat in batches in the Dutch oven.

4)  Sear them until they are brown and gorgeous on all sides and set them aside until you have browned all the meat. 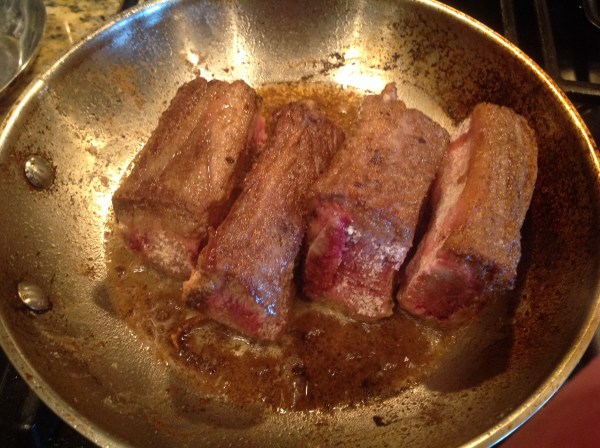 Well hellooooooooo, short ribs.  Here for the hot tub? Of course you are. 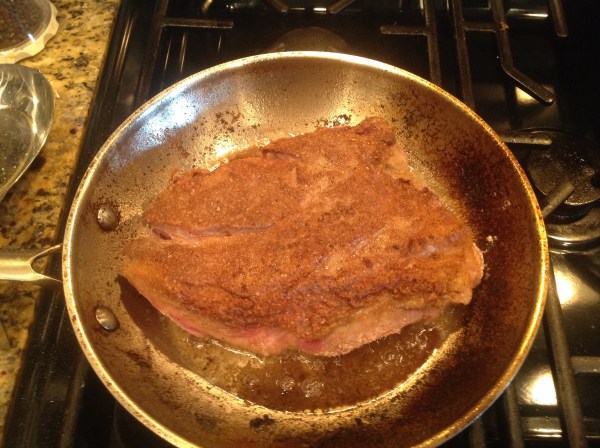 Hey there, Chuck, so nice of you to join us.

5)  Turn your slow cooker on low or preheat your oven to 275.  Add the browned meat to the crock pot or your heavy Dutch oven pot.  Add one half of a beer and one cup of beef broth to the cooking vessel of choice.  Cover.  If using a Dutch oven, put it in the oven.  Crock pot cookers, no extra step here for you — slow cooker on, lid on.  Now,walk away from your creations for at least an hour, or 90 minutes.  Go chop some carrots, celery,potatoes and onions into 2 inch chunks.

FORK IN THE ROAD:  My method includes checking and adding stuff in stages.  If you want this to be a morning crock pot – after work dinner’s done meal, we can absolutely do that.  Instead of adding things in stages, just add all the veggies at once, season them with salt, pepper, and other seasonings, and leave the slow cooker on low all day and they should come out perfectly fine.  When I am home to do so, I like to put the veggies in in batches so they aren’t too mushy at the end of the cooking.  When I can’t do that, all day on low is the way we go. 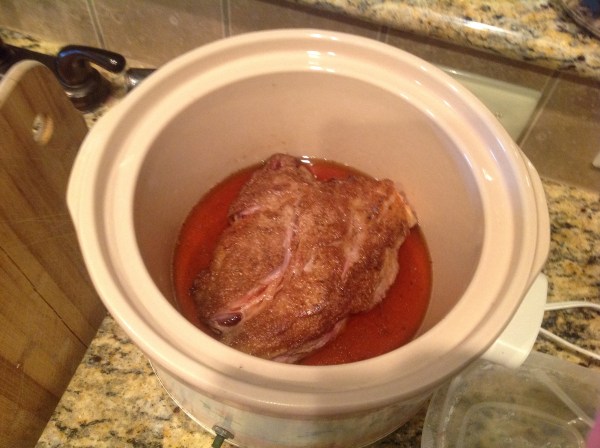 6)  After 60-90 minutes, check your bubbly beef bath.  Add your onions, lid back on, walk away for another hour. 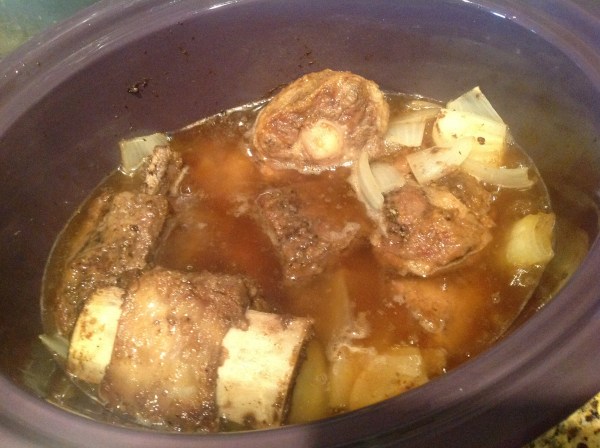 7)  After the post-onions hour, open the lid and put in your carrots and celery and potatoes.  At this stage I usually taste the broth for seasoning, and add a sprinkling of salt over the vegetables because we don’t want them to come out bland.  Stir-tuck them in, and then turn the slow cooker up to high, or your oven to 325, and close everything back up.  Now walk away for two hours.  YES, TWO. 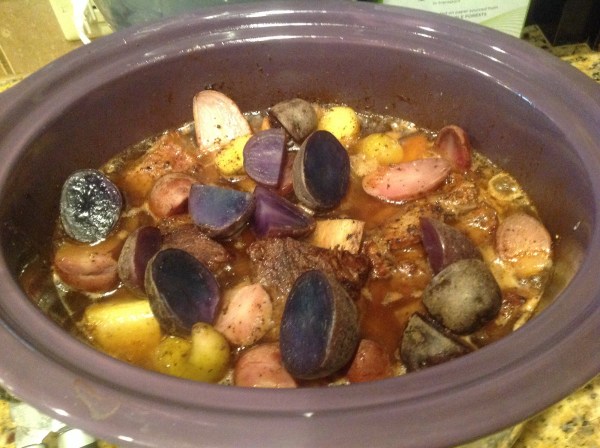 8)  At this stage, which will be between 4 and 5 hours, you should have a pot roast that will easily cut with a knife or just shred with a fork, and your spare ribs and/or oxtails will be slipping away from the bones and falling apart.  Sneak a little bite of the meat to make sure it has taken in the seasonings and salt.  If it needs a little boost seasoning-wise, do that now and then let it go another half hour. If you are perfectly seasoned, you’re done. 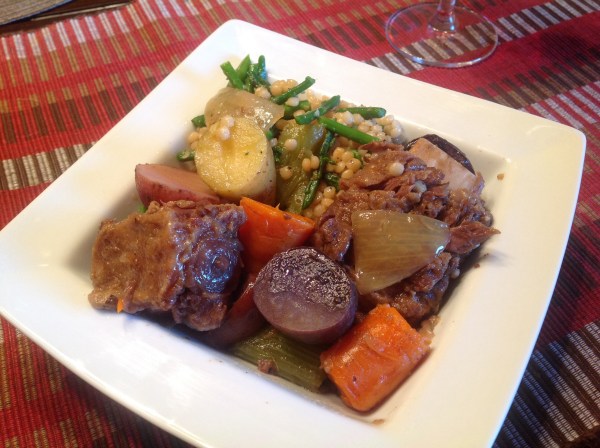 Our dinner guests of honor came out of the hot tub with some differences:  The chuck roast was tender and flavorful, but held together and cut easily with a butter knife.  The short ribs were tender and luscious, and the meat held together but was falling off the bones.  No knife needed. The oxtails fell apart into soft beefy nuggets of amazingness, and were melt-in-your-mouth perfect.

Serve your braised beef and veggies with your choice of sides, but I like the starchy veggies and then some kind of green vegetables.  I also like a starch that can soak up some of that delicious, rich juice.  We had our dinner with King’s Hawaiian dinner rolls and some Israeli couscous (pasta) that I cooked in broth and mixed with some awesome fresh baby asparagus.  We also had sweet summer cantaloupe and cucumber-tomato salad, because that is how we roll in the summer.

I love it when dinner basically cooks itself.  I hereby present this as a way to try something new but not slave over a hot stove.  Look at us branching out and growing!  How exciting!

That is, if you can keep yourself from just using the soft bread rolls to sop up the couple cups of braise juice gravy that’s left in the bottom of the pan.  Was that my outside voice?