For most folks, brisket is the quintessential cut of beef for a BBQ.  It’s traditionally a really economical cut because it’s tough and really only responds well to corning (brined in spices and usually boiled, corned beef) or the low-and-slow method of BBQ on a smoker or grill.  With beef prices soaring and the popularity (and huge size, 10 pounds or so) of beef brisket increasing, I’ve found brisket is about $2 more a pound than some other flavorful cuts of beef and who really needs 10 pounds of brisket?  BBQ beef chuck roast to the rescue!

Let me just start off by saying I apologize for not being around more this week.  My main computer is giving me fits and I’m currently performing surgery, so it’s kind of been a technological wasteland around Casa Sass.  Thanks for sticking with me!

Let’s start last weekend.  The man of the house is a soccer fanatic, and we go to see the local pro soccer team play a lot.  We’ve been making new friends among the soccer supporters (read: crazy megafans) and we really enjoy their company.  When a few of us were sitting around trading blog addresses, I was surprised and excited to learn that our friend Kevin is actually half of a food blogging duo I’ve been reading now for a month or two!  Kevin (chef) and Devon (his foodie wife) have the best blog name:  Food Porn From The Bible Belt.  You can find it in my sidebar, and it’s a great read.  They’re like me — foodies, but not food snobs.

AND NOW TO THE BEEF.

The thing that makes some cuts of beef more flavorful than others is typically how much the muscle gets used on the cow.  This is why, just like on our friend the pig, muscles in the shoulder, the rump, and sometimes the back, are tougher but more yummy cuts of meat.  They have fat and connective tissue in them and respond great to cooking methods like braising, slow roasting, and my favorite, low-and-slow over fire. 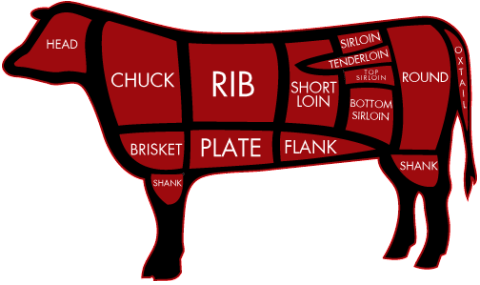 As you can see, where the Chuck is on this beef machine is the same spot that melt-in-your-mouth pork shoulder we’ve talked about, is on a hog.  Chuck = beef shoulder, but the beef industry lets us be on a first-name basis with ol’ Chuck.  The brisket, which is fantastic if you can get it without breaking the bank,  is actually kind of the chest muscle of the cow, which also gets a lot of work.

On a recent trip to the grocery, I found plain ol’ beef chuck roast for $2.99 a pound on sale.  I bought a large portion, about five pounds, figuring I’d cut it in half and make two pot roasts out of it in the crockpot.  I was reminded that it was still in the fridge, and thought to myself, “Hey self, I wonder if we could throw this thing on the smoker!”

I did a little research on BBQ and meat-smoking forums that I quietly stalk to glean for knowledge, and found that lots of people do exactly that.  I was in business!

I sprinkled the chuck on both sides (both sides BOTH SIDES) with BBQ spice — I make my own, and will share that recipe soon, but if you don’t, commercial BBQ spice is just fine.  You can also use salt, pepper, garlic powder (onion powder optional) and some smoked paprika in about equal parts to throw together a basic BBQ rub.

I heated up the coals for the smoker (which is really just a charcoal grill made to hold in the smoke from the fire so it penetrates the meat) and threw the beef on, with a few hickory chunks and keeping the temperature around 250*.  Now — you can do this on a gas grill, or a charcoal grill, with some wood smoking chips or chunks, just make sure you use indirect heat.  We aren’t trying to char and grill this, we want it to cook for 3-5 hours for 5+ pounds.  Don’t have a smoker?  Using a rack in a roasting pan, put your oven on 250 and roast the chuck uncovered for 3 hours.  Try not to open the oven.  You won’t have the BBQ smokiness if you do it this way, but you can always use some BBQ sauce when it’s done cooking to give it that barbecue feeling.

After the first three hours, the meat was almost starting to be pull-apart tender so I put it in a cheap foil pan and wrapped the whole thing tightly in tinfoil, to make a little packet so it would steam and keep cooking in its own juices.  I let it go for another 1.5 hours like that, and then pulled it off the smoker and didn’t even open the tinfoil.  You’ll be tempted.  It will smell awesomesauce.  Trust me, don’t open the foil.  You want all that residual heat to stay in there and keep slowly working on that meat while it rests.

I let it rest for 30-40 minutes on the counter with a towel covering the pan/foil to hold in even more heat — and after the rest, opened the foil packet to find this: 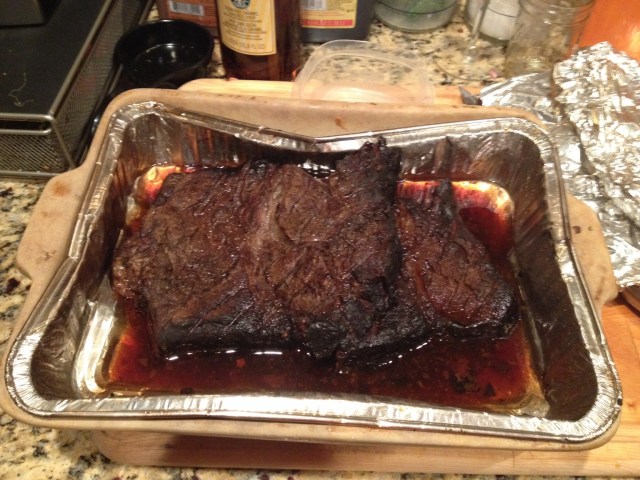 The dark roasty parts around the outside is part of the smoke ring that will come if you are able to use smoking chunks or chips.  It’s where the smoke flavor is going to be on the beef, and the inside should then be shreddable choppable super-juicy goodness.  You’ll want to taste a little bit before you go pulling it all apart, because you are the cook and these are the perks that cooks get.  Explain this privilege, should someone challenge your authority, by telling them you are “checking it for seasoning.”  It is actually possible it might need a dash of salt depending on how much was in your rub.

We pulled it apart and I asked the man to get some buns and some paper plates.  I just used a regular old fork, and it shredded into perfect pieces.  I tossed them in the pan juices and dumped them onto the buns, and had BBQ sauce on the table if anyone wanted to add any.  Please forgive the plain-jane plate, but I was able to capture a shot of his second sandwich before he put it together and devoured it: 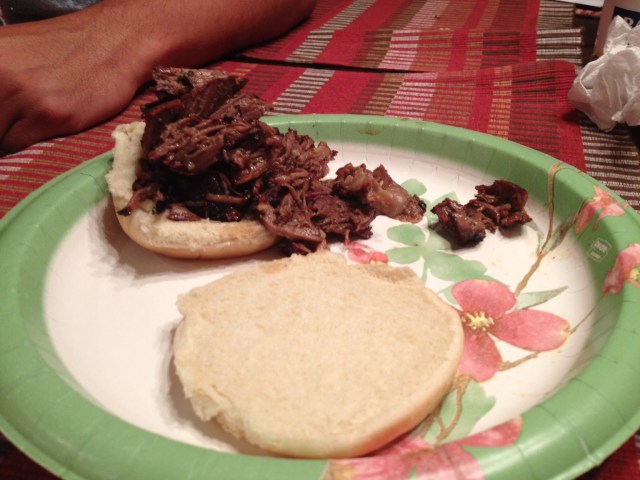 Looking at this picture made my mouth start to water.  Seriously.  It was that good.  THAT GOOD.  Serve it with crunchy sour pickles and maybe some coleslaw, if you’re a BBQ beans person do that — anything that in your mind would go with good simple BBQ beef sandwiches.  We found the sandwiches didn’t really “need” any spreads for moisture on the bread because the meat was so unbelievably juicy.

This is a great option for feeding a crowd, because everyone can just pile on their own meat and bread and condiments to make their own favorite combination.  It’s awesome when you can provide your guests the means to make their own dinner plates up!  It’s also casual enough that paper plates and plasticware are perfectly acceptable.  It’s BBQ!  You’ll need napkins.